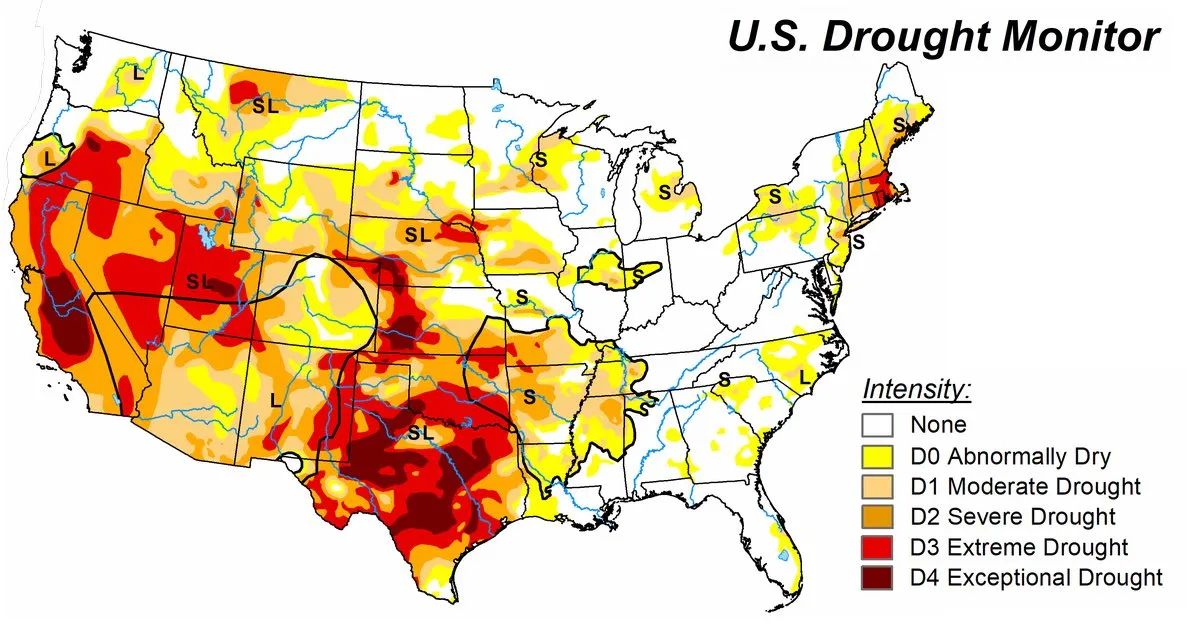 Much of Contiguous U.S. Experiencing Some Level of Drought

Precipitation again varied widely across the Lower 48 this week, which is not unusual during the summer. Across the interior West, monsoon rains were not as intense as last week, but remained heavier than normal. Several times the normal amount soaked most areas in the western half of the Four Corners Region, much of Nevada, southeastern California, reaching as far north as southeastern Oregon and Wyoming. Other areas receiving widespread heavy rains (and thus some improvement from recent dryness) included Deep South Texas and northwestern Nebraska. Parts of Deep South Texas recorded over 10 inches of rain, and 2 to 3 inches were common across northwestern Nebraska. Elsewhere, relatively narrow swaths of moderate to heavy rain dampened parts of the middle Mississippi Valley, Upper Midwest, and Great Lakes Region. Meanwhile, a broken pattern of moderate to heavy rain covered roughly the southeastern quarter of the contiguous 48 states. The higher amounts were in the 2 to 3 inch range though some small, highly-isolated areas recorded a bit more. In contrast, light precipitation at best fell on the Northeast, which teamed with abnormally high temperatures to induce significant and widespread intensification. Other areas observing light rain at best included part of the Upper Midwest, the north-central and south-central Plains. Conditions were seasonably dry along the West Coast.

Light rainfall at best fell on Kansas and farther north across the Dakotas. In contrast, heavy precipitation augmented by intrusions of monsoonal moisture covered large areas from Colorado and Wyoming eastward into western Nebraska. Dryness and drought eased in these areas, with improvement most widespread across the southern half of Wyoming and in the Colorado High Plains. Precipitation in these areas generally exceeded an inch, with 2 to 4 inches falling on several areas from southeastern Wyoming into northwestern Nebraska. Outside of the band of heavy precipitation that brought some improvement to Nebraska and adjacent areas, little or no rain fell on central and southern Kansas, and across most of the Dakotas, with South Dakota recording less rainfall than areas to the north. As a result, dryness persisted or intensified in these areas. Most of the Dakotas and the eastern tier of the Region measured near or below half of normal for the last 3o days, with several patches across the central Dakotas and southeastern Kansas receiving 25 percent of normal or less. In sharp contrast, most areas from central Wyoming through eastern Colorado and western Nebraska reported 150 to locally over 300 percent of normal since mid-July.

Ample rains from the North American Monsoon continued through mid-August. Seven-day totals of 1 to 3 inches – with isolated higher amounts – fell across southwestern New Mexico and Arizona northward through much of the central and eastern Great Basin, and the western half of Utah. As a result, several large areas of improvement were noted this week, with the heaviest rains and most widespread improvement covering Arizona. After an extended period of serious drought, the heavy rains have prompted broadscale improvement in monsoon-affected areas. Two-category improvements over the past 4 weeks have occurred in areas recording the heaviest rainfall. Meanwhile, drought and dryness have been changing in the opposite direction across the northern tier. Most notably, abnormal dryness and moderate drought have been expanding across central and western Montana due to deficient precipitation and well above normal temperatures, while intensification has been slower and covers smaller areas in Idaho and Washington. Most of the Pacific Coast states have been dry and periodically hot as well, but this is their dry season, so totals are not far removed from normal.