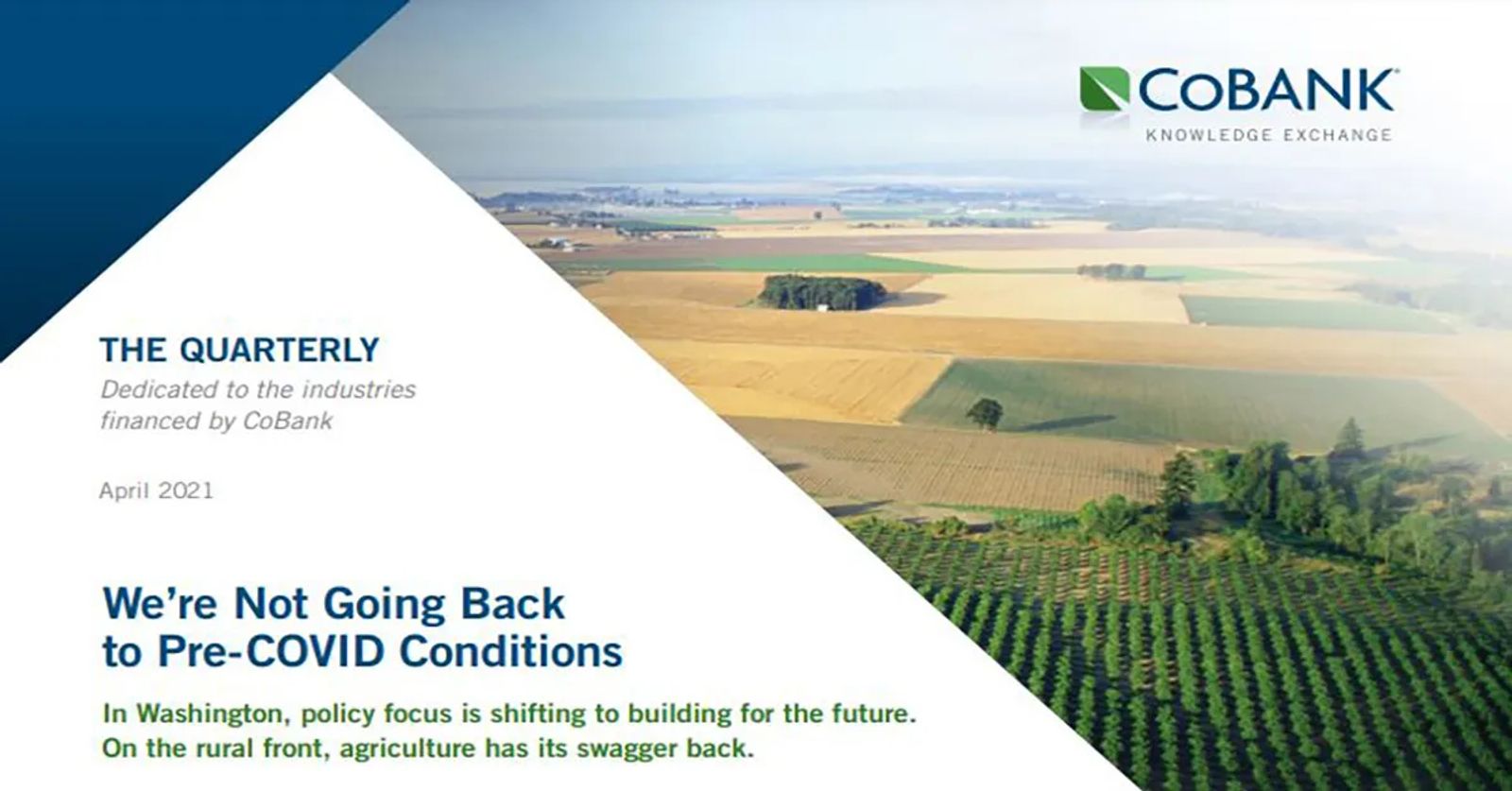 The U.S. economy continues to outperform expectations as stimulus funds are fueling robust consumer spending. Consensus forecasts point to 7% GDP growth for 2021, the fastest rate of expansion since 1984. Inflation is inevitable, however, as the 2020 price declines will widen year-over-year inflation over the next two quarters, and new upward price pressure should push headline inflation above 3%.

The transition to a less COVID-restricted world has begun. But for the economy and rural industries, there will be no going back to pre-COVID conditions. A transformed policy environment and awakened commodity markets are making way for a whole new operating environment, according to the new Quarterly report from CoBank’s Knowledge Exchange.

“The policy focus in Washington is shifting from crisis management to building for the future,” said Dan Kowalski, vice president of CoBank’s Knowledge Exchange division. “And the outcome of the president’s infrastructure plan will have substantial implications for rural water, power and broadband providers. Hundreds of billions of dollars in funding would reshape these industries and intensify the current focus on climate resilience and social equity.”

The cyclical turn in grain pricing, driven by strong demand and tight stocks, continued during the first quarter of 2021 and has picked up further gains ahead of spring planting. Accumulated grain exports to China have been very strong. While the backdrop for the grain and oilseed complex is positive, there are issues worth monitoring that could result in price volatility in the coming months. A recent surge of African Swine Fever (ASF) in Asian countries could temporarily slow soybean demand.

Farm supply retailers are positioned to benefit from an exceptionally strong spring agronomy season, outpacing fall and spring 2020. Financially strong U.S. crop farmers should increase spending given a 3.1% increase in planted corn, soybean and wheat acres. Fertilizer prices rose 42% during Q1 and are now 96% above the trough level in May 2020. While much of the Midwest Corn Belt is free of drought, some areas of concern surfaced in late March.

The U.S. fuel ethanol sector has recovered, with production running near 90% of pre-COVID levels. The industry is adapting to new short-term and long-term realities, including changes in driving and work habits, policy directives on ethanol and fossil fuels and increased adoption of electric vehicles. Operating margins averaged near $0.10/gallon but rose sharply in March to above $0.25/gallon as fuel ethanol prices rose and natural gas prices fell.

U.S. chicken prices started 2021 on a high note, climbing over 20% in the first quarter. These prices offset the double-digit rate of feed cost inflation and brought spot margins well into positive territory. The counts of eggs set and chick placements are a leading indication that chicken production will remain at current levels, so chicken prices continue to look strong through the summer. Expected increases in vacation and business travel this summer will boost food service sales, benefiting the chicken sector.

U.S. beef demand has been incredibly strong in the first quarter despite the challenges in foodservice and the away-from-home dining sector. Strong demand and expectations for limited supply growth in the back half of 2021 have driven up cattle futures. The USDA expects beef production to decline by 3.5% in the second half of 2021, which has helped lift cattle prices nearly 15% above year-ago levels. Packer margins remain elevated, but producers are expected to realize better margins in the second half of 2021.

Strong first quarter demand for pork, coupled with indications of limited supply growth, has lifted hog sector profitability to levels not seen in many years. Concerns over feed and other cost inflation has taken a back seat to optimism for another year of strong pork exports and robust domestic demand as U.S. consumer behavior slowly returns to normal. China has slowed its hog herd rebuilding due to increased ASF cases this winter, helping drive the positive outlook for the remainder of the year.

Combined cotton and rice planted acreage is expected to fall for the third consecutive year in the U.S. according to USDA’s latest projections, as acres shift out of pima cotton and all classes of rice. The surge in upland cotton prices has blunted losses in its acreage. Last year’s rally in refined sugarbeet prices also forestalled losses in sugarbeet acreage. The recovery in U.S. foodservice demand remains an unknown for both rice and sugar, while China remains critical for U.S. cotton demand.

Tree nut exports reached an all-time high with the peak shipping now drawing to a close. However, container shortages and port constraints are estimated to have delayed U.S. tree nut export shipments 10%-20% in the opening months of the year. The lack of movement could potentially translate into higher-than-expected tree nut inventories at the end of the marketing season. Drought conditions in California are raising concerns of limited water allocations in the forthcoming growing season.

February’s polar vortex refocused attention on deficiencies in U.S. power, energy and water infrastructure, and how it is affected by climate change. Widespread failures in energy systems tend to negatively impact water systems. Consequently, any climate mitigation program in the U.S. must account for water and energy system dependencies. President Biden, delivering on his “Build Back Better” platform promise, has announced the American Jobs Plan — a $2 trillion infrastructure and economic modernization bill, which includes a major focus on climate change.

The recently enacted American Rescue Plan Act included $20 billion for broadband availability and affordability and the American Jobs Plan includes $100 billion to bridge the digital divide. Details are not finalized, but President Biden wants to prioritize funding for nonprofits, cooperatives and local governments. The ultimate outcome of the infrastructure plan will have substantial implications for rural water, power and broadband providers.