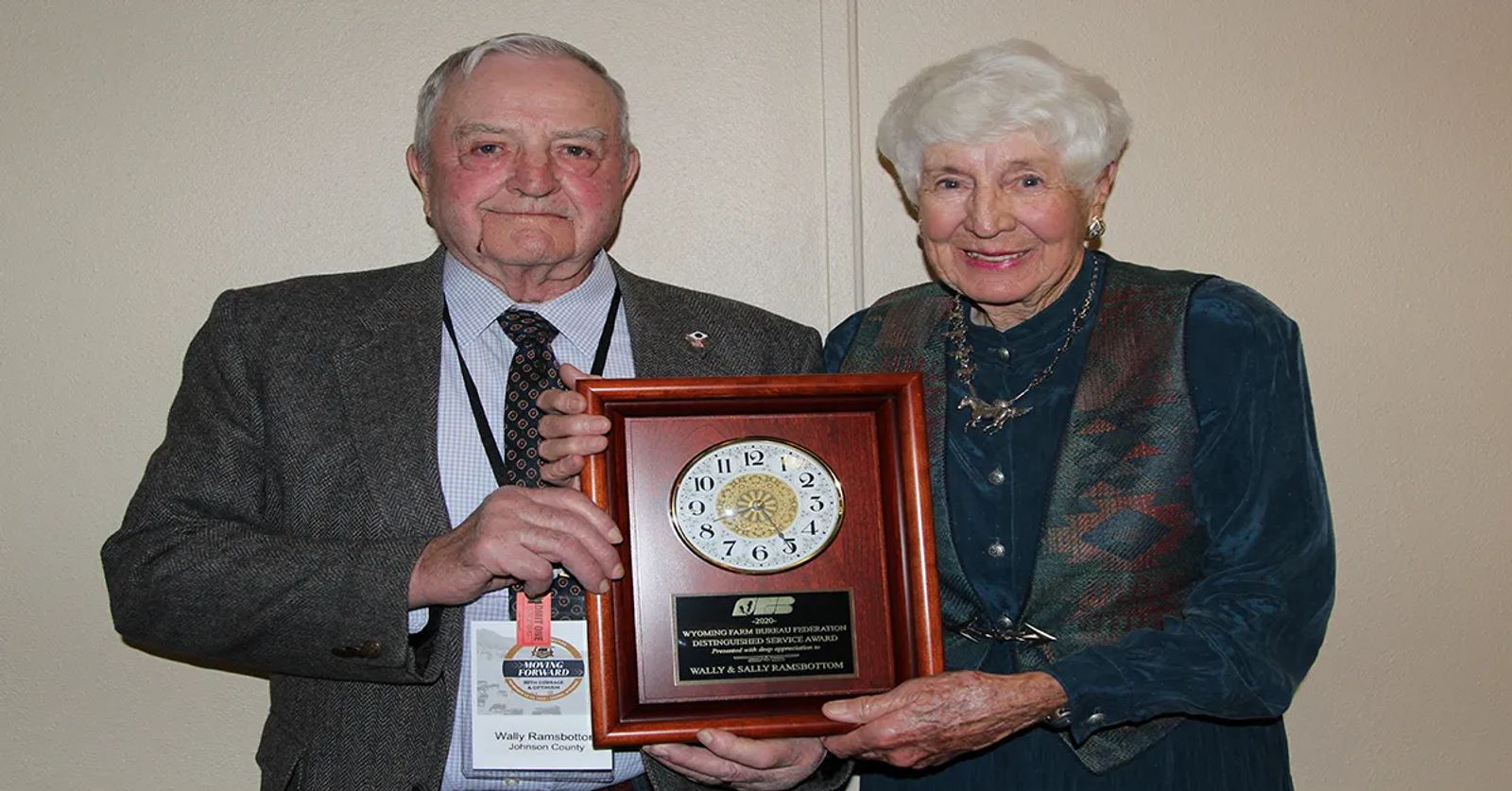 Johnson County Ranchers Wally and Sally Ramsbottom were awarded the  Wyoming Farm Bureau Federation (WyFB) Distinguished Service Award  at the 101 st  annual meeting of the organization. Presented Nov. 13, the award is given to those who have gone above and beyond in their service to agriculture.

“We are proud to recognize Wally and Sally for their dedication to agriculture and Farm Bureau in Johnson County and Wyoming,” said Todd Fornstrom, WyFB President. “Humble, kind, giving, caring, and dedicated are just a few words to describe Wally and Sally. Their dedication to agriculture and the Farm Bureau Federation here in Wyoming is unwavering.”

Sally served as the secretary/treasurer of the Johnson County Farm Bureau Federation for the last 20 years.  Humble leaders, Wally and Sally are a team and prefer to work in the background without recognition. He is always by her side at meetings and she is always working in the background to keep their county Farm Bureau strong. They are the first to arrive at meetings and make sure everything is set-up just right to ensure everyone is comfortable and the meeting will be productive.

“The Ramsbottom’s knowledge of ranching and the issues that impact Wyoming ranching is always appreciated as they share their input through the grassroots policy development process,” Fornstrom continued.

The Meadow Brook Ranch, where Wally grew up, is where they call home in Johnson County. They met dancing at the Sussex Dance Hall and were married in 1961. They have a son, a daughter and four grandkids.

Wally graduated from Colorado State University. He served for six years in the Army Basic Reserves where he was trained as a medic. Wally has always been known as an excellent stockman.

Sally grew up on the Shepperson Ranch near Midwest and graduated from the University of Wyoming (UW).  Sally has always been known as quite a hand in the rodeo arena as well as the ranch. While at UW, Sally competed on the college rodeo team where she won a National Collegiate Champion Goat Tying title.

Hard working and all-around kind people; Wally and Sally work together in everything they do from ranching to family to Farm Bureau. Their steadfast dedication has been the cornerstone of Johnson County’s success. From the ranch to the board room, the Ramsbottoms have exemplified what teamwork is in their distinguished service through this grassroots organization.

“It means a great deal to us to be recognized and nominated by our Johnson County Farm Bureau board,” Sally continued. “We appreciate all of our members and their efforts.”

According to the Ramsbottoms, volunteering is important for your agriculture business. “Farm Bureau is important to ranchers in Wyoming,” Wally said. “Resolutions can be made from the county level on any of our pertinent issues, taken to the District, State and National levels to be made into policy to help agriculture as well as our communities.”

“We volunteer because we need to promote and help agriculture and our business,” Sally emphasized. “People in agriculture need to spend time to resolve the problems they have and support those who can do something about the problems.”