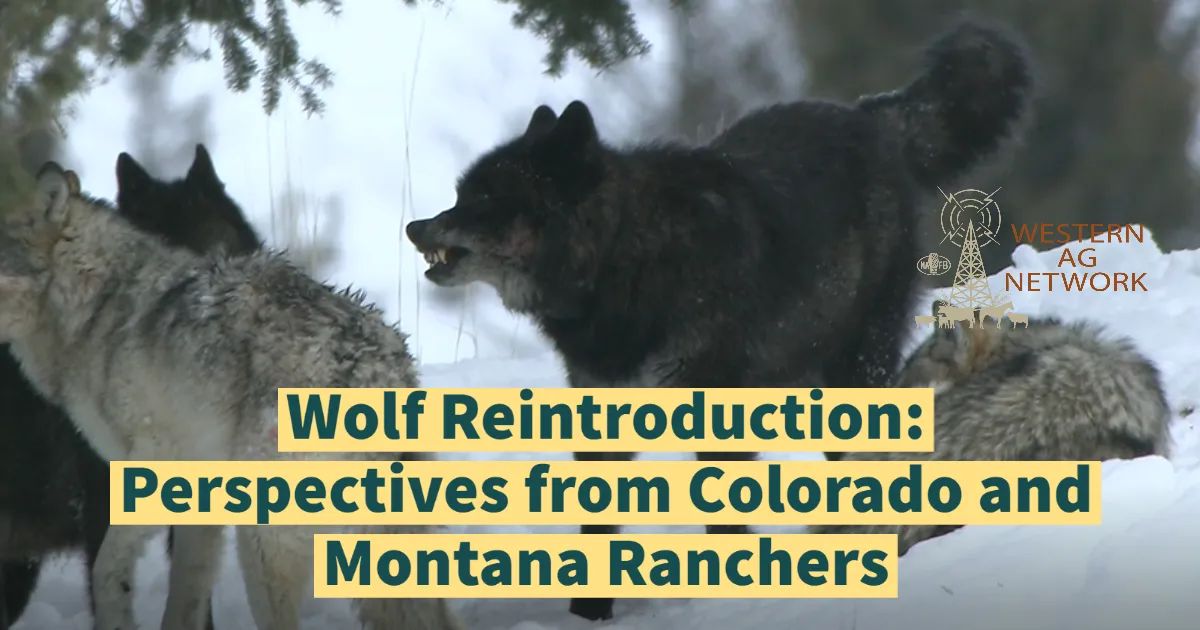 As the state of Colorado drafts a wolf reintroduction plan, the states livestock producers are concerned with the effort.

In last 20 years, the Montana Stockgrowers Association (MSGA) has witnessed the reintroduction of wolves to Yellowstone National Park, their recovery and advocated for their delisting from the Enraged Species Act ESA. MSGA was also a strong voice in how Montana manages the apex predator.

To show their support for Colorado ranchers, the Montana Stockgrowers have made an official request that Montana wolves to not be transplanted in Colorado.

Podcast: Click Play to listen to the entire conversation between our Networks Lane Nordlund, Jay Bodner and Terry Fankhauser.

So how did the state of Colorado get to the point of wolf re-introduction? Colorado Cattlemen’s Assoc.’s (CCA) Terry Fankhauser explained it all came from a state ballot initiative.

"It's interesting, the western part of Colorado predominantly has the ability to pass initiatives and referenda,” Fankhauser said during the LaneCast Ag Podcast. “In the early days of statehood, it gave the citizens a voice in their government. That was a fundamental belief at one point in time and many good things probably passed because of it.”

But now the initiative process has been hijacked by anti-animal agriculture and environmentalist groups.

“In the last 25 or 30 years we started to see more activist orientated, more conditioning of the citizens government, as well as the administrative bodies and states began to be amended,” said Fankhauser. “It's really not the intent of the process. Some states have worked hard to raise the bar, if you will, to make it more difficult to adjust those referenda or amendments. It's gotten really egregious in Colorado”

“Voters have outlawed spring bear hunts in Colorado,” said Fankhauser. “Voters have outlawed leg-hold traps in the last 30 years. Now more “Ballot Box Biology” with introducing wolves that are fully recovered, in my opinion and in the opinion of two different Presidential Administrations. Now, we're going to introduce wolves in Colorado. The citizens barely passed this initiative by just 1% of the vote.”

Fankhauser explained that the reintroduction is designated on lands west of the Continental Divide.

“Remind you, every county, except for two west of the Continental Divide opposed reintroduction,” said Fankhauser. “It was a Front Range vote, which won't have wolves introduced it in their backyard. There's some irony there.”

At this time Colorado must come up with a wolf management plan by the year 2023.

“We have to come up with a plan to have a viable, reproducing wolf population with no limits on the number of wolves that are introduced,” said Fankhauser. “So, we're going through a planning process right now with the state and stakeholders to determine location, management, compensation, all of those these issues.”

It’s an issue known all too well to Montana ranchers and outdoorsmen.

“We've been working on this wolf issue for a number of years,” said Jay Bodner Exec. VP of the Montana Stockgrowers Association. “You go all the way back to 1995, 1996 when the idea at that time was we're going to reintroduce wolves into Yellowstone National Park (YNP) and they're going to stay there. Well, we quickly found out that wasn't the case.”

Bodner explained that the recovery of the Canadian introduced wolf in YNP happened quickly.

“We recognize from a livestock producer perspective that (YNP) is not an island. Wildlife really moved across the state and outside of the borders of Yellowstone National Park. They reintroduced two different populations into that Park.”

“Those wolves increased the population at a trend that was just astronomical” said Bodner.  “Along with that comes certainly the migrations of wolves outside of the park into much of Western Montana.”

Montana has faced the same issues that Colorado will experience.

“We faced many of the same issues that Colorado is just starting to face now,” said Bodner.

“Increased livestock depredations. We had no management tools in place to be able to defend our livestock. Even at that time, Montana when we looked at the distinct population segment, the lines that they had drawn in Montana, we had part of the state that was endangered. Part of the state that was in the experimental population. So, we had two different sets of rules that we were dealing with at the time.”

“It was extremely confusing, extremely difficult to manage anything when you have an arbitrary line drawn across your state,” said Bodner. “At that time, we hadn't even drawn up a state management plan. That takes years. We were very adamant about being at the table trying to draw up a state plan that at least put some sideboards in place. We wanted to put at least some potential numbers, so we didn't exceed these population objectives. But we actually blew right past even the number that were put in place.”

On Feb. 10, 2022, a federal judge in California has returned wolves in many parts of the United States to the endangered species list. The judge's ruling reverses a Trump-era rule that removed Endangered Species Act protection for the apex predator.

The ruling doesn't apply to wolves in Montana, Idaho, and Wyoming, where management will remain in state control.

The Midwest states of Minnesota, Wisconsin, and Michigan are mostly affected by the ruling. Some west coast states plus Arizona and New Mexico are also included.

“The only reason we got wolves delisted in Montana is it took a congressional action,” explained Bodner. “That's the only reason this week’s court ruling has excluded, Montana, Idaho, and Wyoming. It took Congressional action to delist them. We certainly feel the pain that other states are going through. We look at Oregon and Colorado, it’s something that we faced years ago, but we certainly feel for those producers.”

To show their support for Colorado agriculture, MSGA’s Board of directors decided to be proactive on this issue and state the Association’s opposition to using Montana wolves in the reintroduction in Colorado.

In a letter sent to Montana Fish, Wildlife and Parks (FWP), MSGA shared concerns for Colorado livestock producers who have no available tools in place to allow for the protections and programs for their livestock that Montana producers currently have.

“Giving Colorado wolves from Montana isn’t going to solve the wolf issues in our state, but it will significantly impact livestock producers in Colorado,” said Jim Steinbeisser, MSGA President. “MSGA represents ranching families throughout the state, and we have experienced first-hand the impacts this apex predator has on our family ranches.”

From the initial reintroduction into the state, Montana has continued to put in place, through policy and legislation, management tools for the livestock industry to help protect livestock. While producers still face significant predation from wolf activity, there are measures in place to lessen those losses.

It is critically important livestock producers do not shoulder the burden and costs of these types of reintroduction efforts, especially with no management tools in place to protect their property, livelihoods, and resources ranchers so carefully manage.

For these reasons, the MSGA Board of Directors is in strong opposition to Montana Fish, Wildlife and Parks considering any request from the state of Colorado to provide Montana wolves for reintroduction into Colorado.