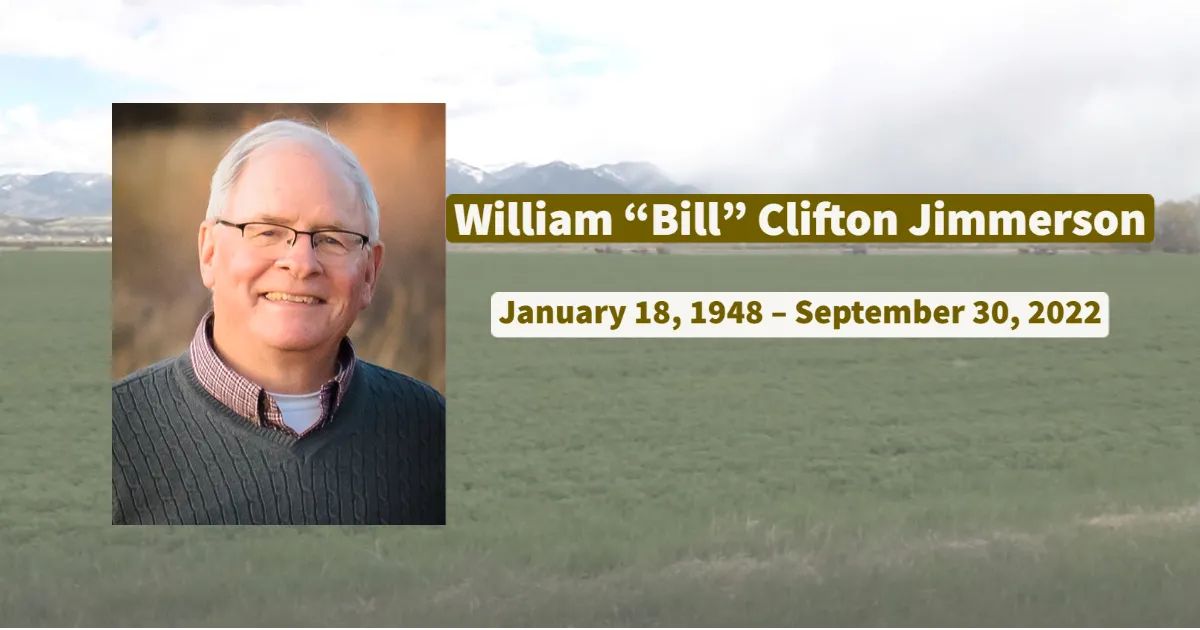 Bill Jimmerson – aka Mr. J. or Papa – passed away unexpectedly on September 30, 2022, at his home in Belgrade, MT. In his 74 years, Bill accomplished more and impacted more people than most of us could do in multiple lifetimes.

Bill was born to Gerald and Alice Jimmerson on January 18, 1948, in Lewistown, MT. He spent his childhood in the Salt Creek area on the family ranch with his four siblings: Geraldine, Gary, Jack & Nancy. Bill attended the Box Elder School with his siblings and was the top student in his class for eight years…as well as the ONLY student in his class. Bill attended Fergus High School where he was introduced to agriculture education and FFA through his teacher and longtime friend and mentor, Jim Schultz. After high school, Bill attended Montana State University and was a member of the Alpha Gamma Rho Fraternity. The summer of his sophomore year, Bill went on a fortuitous blind date with Molly McGuire where it was “love at first sight” – both that night and still after 53 years of marriage. Bill was in the Army ROTC program at MSU and served as a 2nd Lieutenant in the US Army for three months of active duty and two years of reserve duty after he graduated from MSU.

Bill began his teaching career at Grass Range, MT in 1971 where he taught for two years before returning to the family ranch. A back injury forced Bill to re-think his career and sent him back to Bozeman to get his Master’s in Agriculture Education from MSU in 1980. Bill moved his family to Conrad, MT in the spring of 1980 where he subsequently taught ag education for 23 years, impacting the lives of countless students and members of the Conrad community. Mr. J was a beloved teacher, and he invested his time and energy into every person he encountered. His list of accomplishments and awards as a teacher are too numerous to detail, and he would never have told you about a single one of them, instead turning the table to focus on others. Bill was honored with awards for his service by Montana FFA, the National FFA Organization, the White House (as a Champion of Change in 2012), and even inducted as an honorary member of the Blackfoot Indian Nation due to his work championing American Indians in the FFA. An abbreviated list of achievements from Bill’s time teaching in Conrad includes mentoring 12 student teachers, 66 chapter members who attained the State FFA Degree, 15 chapter members who attained the American FFA Degree, and 11 members to be selected as State FFA Officers.

After retiring from teaching in Conrad, Bill went on to work as a loan officer at Stockman Bank, but a desk job simply did not suit him. Bill then spent a year as an adjunct professor in the Agriculture Education department at Montana State University in 2004 prior to being asked to serve as the State FFA Advisor from 2005-2012 (with an extra year in 2014 to fill in). Bill helped bring the Montana FFA Foundation to life, serving as a Board member for a number of years and as the Interim State FFA Foundation Executive Director in 2018. He claimed he finally got retirement to stick after the third try!

While Bill’s impact throughout his professional career is truly immeasurable, Bill’s proudest accomplishment was his family. With his best friend Molly, Bill was an amazing father to his daughter Traci and son Jason. His most prized role was as Papa to his granddaughter, Claire, and grandsons, Caden and Kellen. He loved his grandchildren more than anything and invested his time, energy, and love in all of his family members each and every minute of his retirement.

Bill had many passions: all things Montana State University Bobcats (primarily football and women’s basketball), the St. Louis Cardinals, playing cards with his family, whistling tunelessly, chewing on toothpicks, and watching rodeo and bull riding. He was an avid gardener, carefully tending to a variety of vegetables but was proudest of his corn and pumpkins. Bill was also a road trip aficionado and crisscrossed the country in cars of varying degrees of reliability while pointing out landmarks (e.g. mountain ranges, rivers, etc.). He rarely met a roadside attraction he didn’t “encourage” his family to explore. He came into fishing late in life, and while he was never very successful, he nonetheless enjoyed it as a means of spending time with his beloved grandchildren.

Bill was a believer and follower of Christ – and he was clearly blessed with many God-given gifts that he freely shared with the world. He blessed us all with his smile and the twinkle in his eyes. The void left in our hearts is immeasurable, but we all take solace in knowing he is in Heaven with his Lord & Savior Jesus Christ – and he’s probably already playing five-card draw with his brother-in-law, Larry Branstetter.

Bill is survived by his wife of 53 years, Molly; daughter, Traci and granddaughter, Claire; son, Jason; daughter-in-law, Sandra; and grandsons Caden and Kellen. Bill is also survived by his sister, Geraldine; brother, Gary (Carol); brother, Jack (Marlene); and sister, Nancy (Pat) along with numerous nieces, nephews, and grand-nieces and nephews – many of whom would tell you that Uncle Bill was their favorite. We lost Bill too soon and already miss him fiercely, but his impact will live on in each of us as we continue to share the influence that Bill had on our lives.

In lieu of flowers, Bill’s family asks for donations to be made to the Bill Jimmerson Legacy Fund to support ongoing scholarships provided in Bill’s name. Donations can be made by visiting the Montana FFA Foundation’s webpage at https://montanaffa.org/donate/ or HERE. Checks can be made to the Montana FFA Foundation with Bill Jimmerson Legacy Fund in the memo and sent to:

A Celebration of Life will be held at 4 P.M. on Sunday, October 9, 2022, at the Conrad High School Gymnasium in Conrad, MT.

Arrangements are in the care of Dokken-Nelson Funeral Service. www.dokkennelson.com