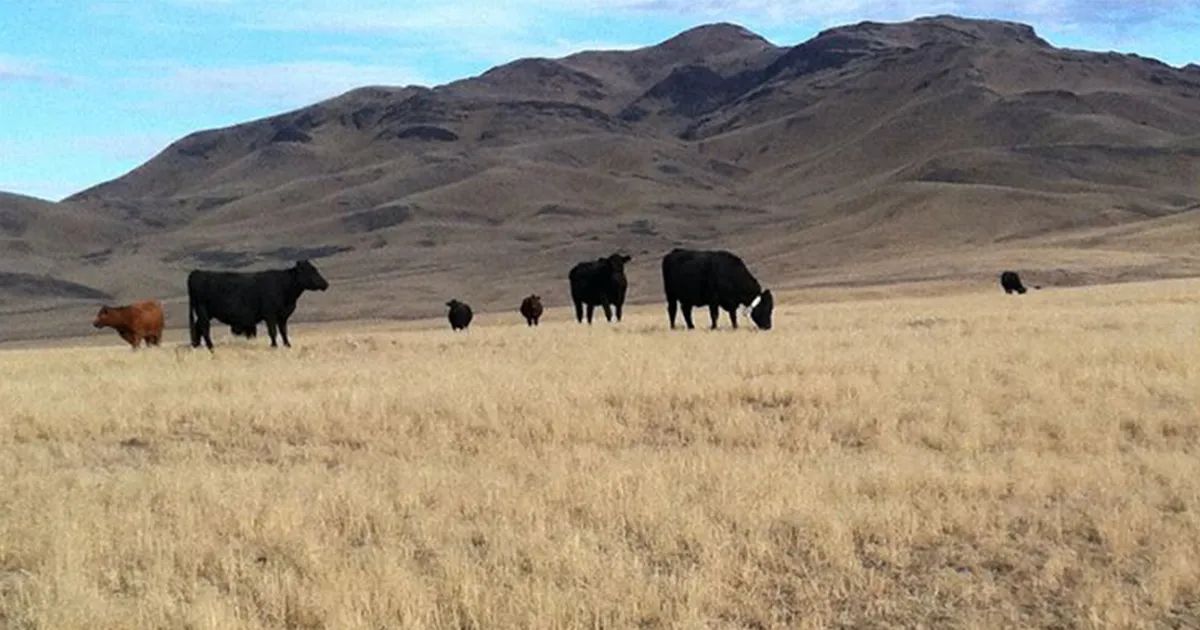 Cheatgrass, an invasive annual grass that has invaded western rangelands, is responsible for much of the increasing wildfire danger in the Intermountain West. However, scientists at the University of Nevada, Reno have discovered that fire danger can be reduced through the application of targeted cattle grazing in the dormant growing season by attracting the cattle with stations containing protein feed supplements.

"Our work establishes that protein feed supplements in the fall and early winter can attract cattle to locations dominated by cheatgrass, significantly reducing the standing fine-fuel biomass by more than 50%, while making room for native grasses to grow," Barry Perryman, professor of rangeland sciences at the University of Nevada, Reno said. "This research builds and affirms other studies that show dormant season grazing helps control the dominance of cheatgrass,"

One of the greatest ecological threats to ecosystems of the Intermountain West has been and will continue to be invasive annual grasses. The non-native cheatgrass (Bromus tectorum L.) is the most problematic invasive annual grass at regional spatial scales. It is estimated that cheatgrass covers 11,000 square miles of the Great Basin, and it is the ecologically dominant species on more than 20% of the sagebrush steppe.

Strategic supplementation provides a valuable tool to target cattle grazing at speciﬁc locations within cheatgrass-invaded systems to reduce ﬁne fuel buildup during the dormant season, according to the study published in Elsevier's journal Rangeland Ecology and Management.

"It is difficult to concentrate animals in one place during spring for long enough periods of time to be of any use," Perryman said. "However, cattle can be concentrated on cheatgrass during the fall, using supplementation as a tool. Reducing the amount of cheatgrass fuel carryover may effectively reduce the amount of total fuel available during the next year’s fire season. If several hundred pounds per acre of cheatgrass can be removed during the fall, through cattle grazing, that is several hundred pounds that will not be added to the next year's fuel load."

Perryman and the team of scientists used liquid protein supplements in October and November from 2014 to 2017 at a production scale working ranch with a herd size that ranged from 650 to 1,200 head of cattle. The study pasture was a mixture of rangeland and abandoned farmland heavily invaded by cheatgrass after farming ended there in the late 1970s. Vegetation on the site was dominated by cheatgrass with some areas also having a combination of cheatgrass and greasewood.

Where the cattle grazed along the transect line of the supplemental feeding stations, consumption of cheatgrass averaged 48% to 81%, with no differences detected between the closest and farthest supplement stations from water.

"While more research is needed to fully understand the extent of how far protein supplements can successfully attract cattle away from water in large pastures, our research indicates this distance can be up to two and a half miles on relatively ﬂat cheatgrass-invaded areas during fall and early winter in northern Nevada," Perryman said.

Under a scenario of near monocultures of cheatgrass, fall cattle grazing is a logistically viable tool to reduce the amount of carryover ﬁne fuels in large pastures.

"With strategic placement of supplements, we can direct this grazing to effectively create a linear fuel break," Perryman said. "Cheatgrass can provide an important forage resource for cattle in much of the Great Basin and Intermountain West during the dormant season, and this can help during the fire season."

Flexible grazing management options will facilitate the use of targeted grazing fuel reduction projects at strategic times, such as fall or winter, on rangelands of the Intermountain West and provide more opportunities to better match livestock production and vegetation management objectives in a “win-win” situation within annual grass−invaded systems, the authors conclude.

In earlier studies, a highly controlled, small-scale targeted spring grazing research project found that 80% to 90% reduction of above ground biomass reduced ﬂame length and rate of ﬁre spread during the following October. On sagebrush and native perennial grass plant communities, it was reported in another study that 40% to 60% reductions in biomass through winter grazing reduced ﬂame height, rate of spread and area burned compared with an ungrazed control area.

Perryman and colleagues have two large demonstration projects underway in southeast Oregon and a similar study, without supplementation, in the Vale District, Oregon. The research operations also found benefits for cattle ranchers, and the rebounding of native grasses.

"Every operation is different," Perryman said about ranchers adopting the idea. "It will benefit some and be of no utility for others. It has saved significant hay costs in our eastern Oregon demonstration projects."

Perryman, who is also part of the University’s Experiment Station, said it appears native grasses are able to repopulate the areas where the cheatgrass has been reduced, whether from seeding or naturally.

"There was a major seeding effort on the study sight in 2018-19 by the operator (it was located on private land)," Perryman said. "In some instances areas may be seeded, while in other instances there are enough existing perennial grasses to respond. There are some published studies now showing increases in perennial grasses after about four to six years. Kirk Davies, a co-author of this study, has led that research."

Authors of the journal article are Perryman, who is the chair of the Department of Agriculture, Veterinary & Rangeland Sciences in the College of Agriculture, Biotechnology & Natural Resources; lead author Mitchell Stephenson, who was a post-doctoral student of Perryman’s during the study and is now a range management specialist, Panhandle Research and Extension Center, University of Nebraska-Lincoln; Brad Schultz, professor and Extension educator, University of Nevada, Reno; Chad Boyd, Kirk Davies and Tony Svejcar, rangeland scientists with the U.S. Department of Agriculture −Agricultural Research Service in Burns, Oregon.