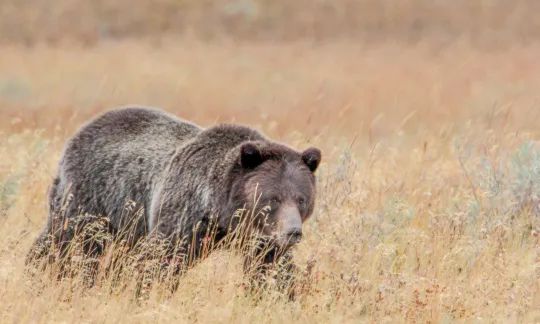 U.S. Secretary of the Interior David L. Bernhardt announced Tuesday at a roundtable with community members in Omak, Washington that the Department of the Interior (Department) will not move forward with a new Grizzly Bear Restoration Plan for the North Cascades Ecosystem and the associated Environmental Impact Statement (EIS).

“Representative Newhouse has been a tireless advocate for his community and his constituents regarding plans to reintroduce grizzly bears into the North Cascades Ecosystem,” said Secretary Bernhardt. “The Trump Administration is committed to being a good neighbor, and the people who live and work in north central Washington have made their voices clear that they do not want grizzly bears reintroduced into the North Cascades. Grizzly bears are not in danger of extinction, and Interior will continue to build on its conservation successes managing healthy grizzly bear populations across their existing range.”

“This announcement is welcomed by my constituents in Central Washington who have consistently shared my same concerns about introducing an apex predator into the North Cascades,” said U.S. Representative Dan Newhouse (WA-04). “Homeowners, farmers, ranchers, and small business owners in our rural communities were loud and clear: We do not want grizzly bears in North Central Washington. I have long advocated that local voices must be heard by the federal government on this issue, and I am enormously grateful to Secretary Bernhardt for not only listening to our concerns and opinions, but for delivering this news in person, right here in North Central Washington.”

The Department began planning the environmental review process for an updated Grizzly Bear Restoration Plan for the North Cascades Ecosystem in February 2015 under the Obama Administration without comprehensive public involvement and engagement. Beginning in 2017, the Department held numerous public meetings, Tribal consultations and more than 70 stakeholder briefings, during which overwhelming opposition was received for the plan. Two public review and comment periods were facilitated on the Draft EIS, receiving more than 143,000 comments.

Separate from the issue of reintroducing grizzly bears into the North Cascades, the recovery of grizzly bears in the lower 48 states is an amazing success story due to collaborative conservation efforts led by federal, Tribal, state and other partners. The National Park Service and U.S. Fish and Wildlife Service’s have led these efforts for self-sustaining grizzly bear populations, primarily focused in six areas of Idaho, Montana, Washington and Wyoming.

In October of last year, Secretary Bernhardt visited Montana with U.S. Representative Greg Gianforte, speaking to additional actions that have now since been taken by the Department to strengthen state management of grizzly bears, help limit human conflict and effectively manage healthy populations of the species.

More information about the Department’s efforts to improve the status of grizzly bears in the lower 48 U.S. states can be found online.

A copy of the notice of termination can be found here and will be published in the Federal Register.