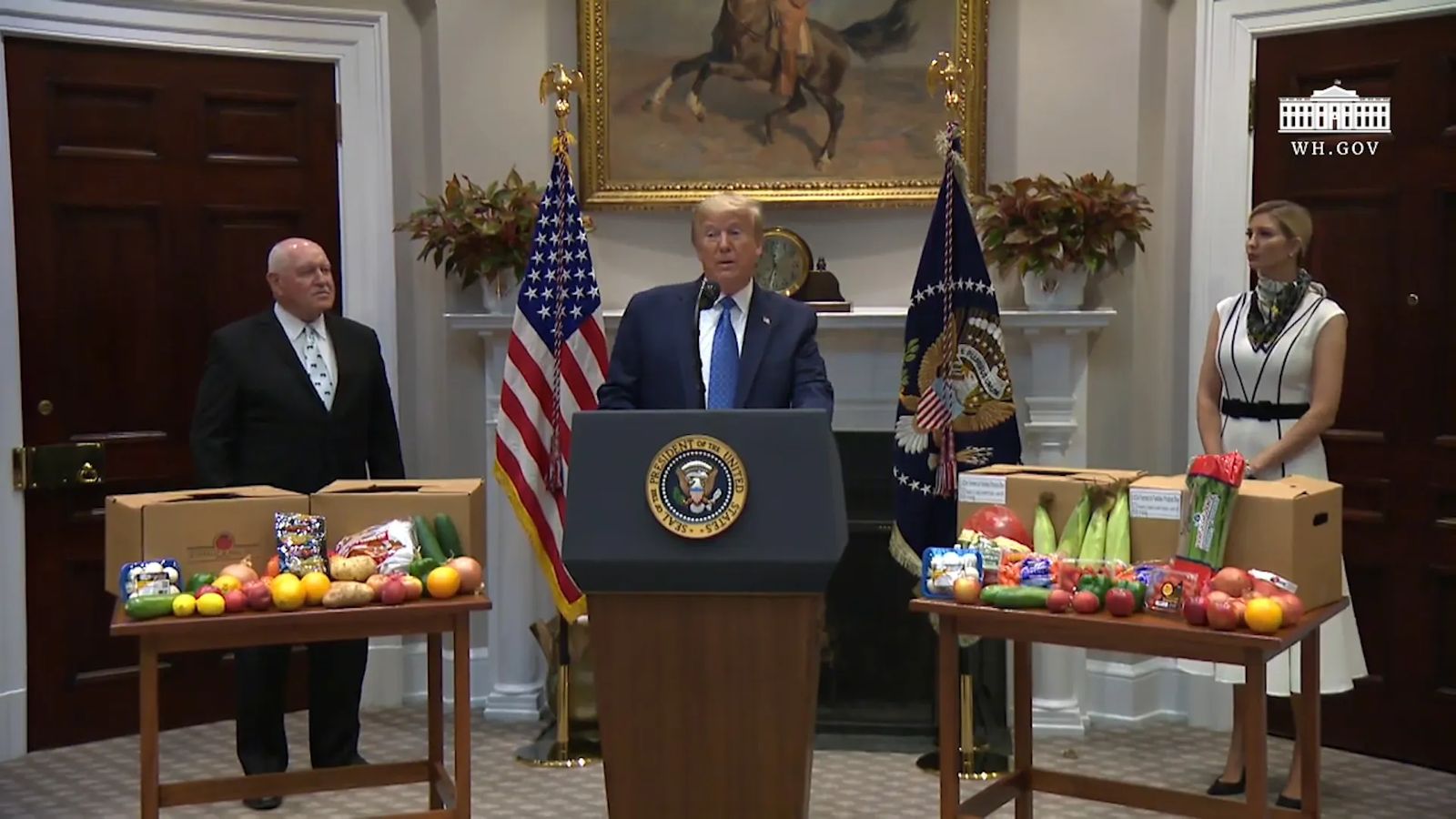 Farmers and livestock producers can start signing up next week for direct aid from USDA through the Coronavirus Food Assistance Program (CFAP), President Donald Trump and the administration announced Tuesday.

The White House and USDA shared details of the $16 billion in direct aid that will flow through USDA's Farm Service Agency to a broad array of producers for various products, including cattle, pork, dairy, fruits, vegetables and commodity crops.

At a White House event Tuesday that was livestreamed, President Trump and a handful of ag leaders championed the $16 billion in direct aid to farmers, as well as the $3 billion in commodity purchases that will go to food banks. The funds came from the Coronavirus Aid, Relief and Economic Security (CARES) Act passed by Congress in late March. Trump touted tax cuts for farmers, support for ethanol and direct aid for trade retaliation as some of the initiatives driven by the president's ongoing support for farmers.

"I tell you, you can go back to Abraham Lincoln, there's no president who has treated the farmers as well as Trump," the president said. "I don't know. I hear we're doing well with the farmers, but I can't imagine -- I want to find out who wouldn't be with Trump, right?"

Three Virginia farmers at the event talked about support they have received from the Small Business Administration Paycheck Protection Program and the aid they will receive from commodities being purchased for food banks or direct payments. The presidents of the National Cattlemen's Beef Association and the American Farm Bureau Federation also spoke.

Zippy Duvall, president of AFBF, said he first spoke to Trump during the 2016 presidential campaign and said Trump has lived up to his words of being a friend to farmers.

"Farmers across America are very appreciative, Mr. President, of what you have done," Duvall said. "You stood behind us during the trade war, then stood behind us during all the difficulties we went through, and now with the pandemic, you stood behind us again. You know, and you made the comment, we're the only group that comes to the White House without our hands out. We want that level playing field, we want that trade, we want to be able to make our money from the markets, but we appreciate when we are going through difficult times that you stand behind us."

Enrollment through local USDA Service Centers (Farm Service Agency offices) will begin May 26, and USDA expects payments could go out to producers within a week after sign-up begins. Keep in mind, farmers and livestock producers applying for aid will have to call their FSA office to set up a phone-call appointment because service centers are not meeting producers face-to-face due to coronavirus restrictions. Farmers also can communicate with FSA staff through email or use online tools to fill out applications.

Under the program, producers will receive 80% of their expected payment initially. The remaining 20% will come later in the year, likely after Commodity Credit Corp. coffers have been replenished.

Payments will be based on price declines from mid-January to mid-April, USDA stated, as well as specialty crops that had been shipped from the farm during that time but then spoiled because of lost markets.

Following concerns raised by livestock producers, USDA also has increased the payment cap from $125,000 per individual to $250,000. Producers must certify that they either meet the income limitation of $900,000 adjusted gross income or show at least 75% of their total income is derived from farming, ranching or forestry. Farmers must also meet conservation compliance rules.

USDA listed other commodities for payment eligibility, including corn, soybean, cotton, barley, canola, sorghum, millet, sunflowers, oats, durum wheat and hard red spring wheat. Those farmers will receive a payment based on inventory subject to price rise as of Jan. 15, 2020. A payment will be made based on 50% of total 2019 production or the 2019 inventory based on Jan. 15, whichever is smaller, multiplied by the commodity's payment rates.

Also at Tuesday's White House event, President Trump said he had read that the U.S. imports cattle and he suggested to Agriculture Secretary Sonny Perdue that trade deals allowing cattle imports should be terminated.

"We have a lot of cattle in this country, and I think you should look at the possibility of terminating those trade deals," Trump told Perdue. The president later said, "I'm saying, why are we bringing in cattle when we have so much ourselves?"

Nearly all live cattle imports that come into the United States come from Canada and Mexico, and the Trump administration just completed a rewrite of the North American Free Trade Agreement (NAFTA) with the U.S.-Mexico-Canada Agreement (USMCA). So far this year, Mexico has exported 544,000 cattle into the U.S., of which about 80% are feeder steers. Canada has exported about 250,000 head to the U.S., of which just over 70% are animals direct for slaughter. Cattle imports from both Canada and Mexico are down slightly year to date from 2019, according to USDA reports.

Farmers can find out more details on the aid program at www.farmers.gov/cfap.