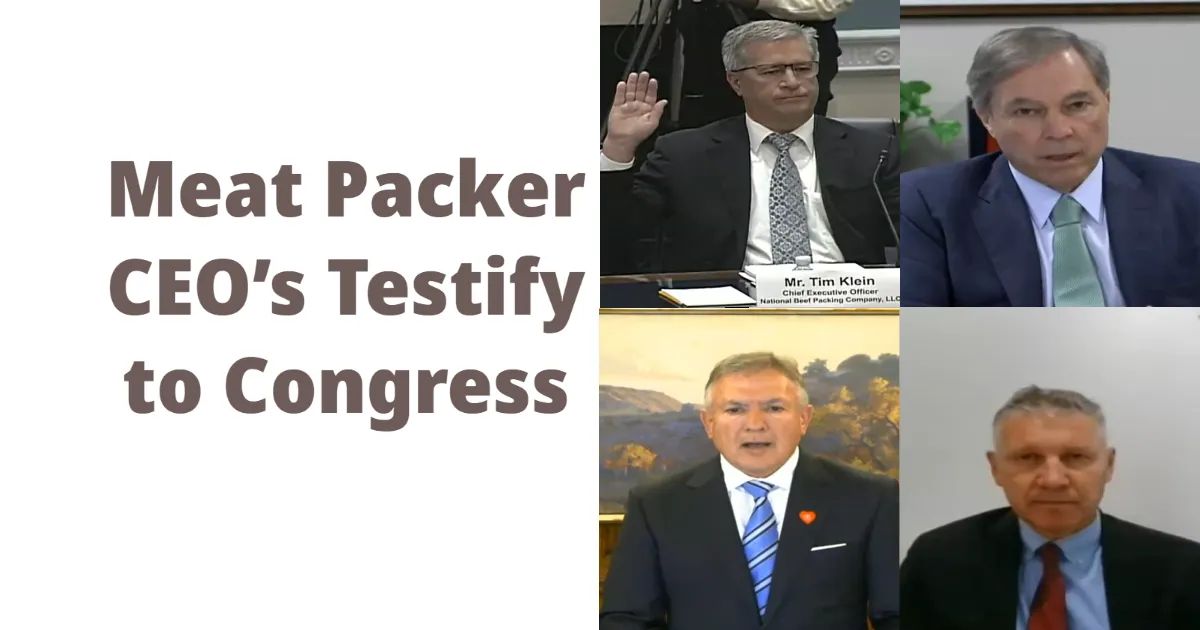 House Agriculture Committee Chairman Rep. David Scott, D-Ga., asked the CEOs of the four major meatpackers during a hearing on the cattle markets on Wednesday whether they colluded to reduce record-high beef prices in 2014-15, and as a result, increase packer margins.

"Was there ever an agreement between your four companies to cooperate together on issues impacting supply or pricing?" Scott asked.

"I need to know if there ever was an agreement with you to set this up because the chart clearly states that it was 2015, and there was an abrupt, immediate charge up."

They all responded "No."

Such was the nature of a more than five-hour hearing on the cattle markets, filled with political drama.

The record cattle prices of 2014-15 came about at the time as cattle herds were their lowest since 1952.

The Government Accountability Office in 2018 found increased concentration in the cattle industry had little overall effect on prices from 2013 to 2016. (See https://www.dtnpf.com/….)

Watch the entire hearing on

In particular, cattle prices dropped by about 40% from late 2014 through 2016, sparking calls for federal investigations into possible market manipulation. At the time, the GAO called for increased price transparency.

The Biden administration, however, has pointed to packer concentration as the reason for higher meat prices in 2022.

The House Ag Committee held a split hearing, starting the day by questioning cattle producers and concluding with hearing from packer CEOs.

Earlier in the day, Missouri cattle farmer Coy Young told the committee his family's farm cannot continue operating long term unless changes are made to the cattle markets to allow cattle producers to earn profits.

Young was featured in a December 2021 New York Times story on the cattle industry. The Times reported Young had considered suicide.

"Farming and ranching has the most suicides in any industry due to distress, a shrinking bottom line," Young said to the committee, "and that's fueled by the greed and capitalistic nature. That's everyday business, and the big four that are in question here today, there's blood on the hands of the packers and leaders in Washington, and no one seems to care.

"I know we live in a country where capitalism reigns supreme and it's every man for himself. The packers take capitalism to a whole new level," Young said.

The Senate Committee on Agriculture, Nutrition and Forestry on Tuesday heard from industry witnesses and senators who both supported and opposed a cattle markets price discovery bill.

In particular, bill supporters pointed to market control exerted by the four major packers that control 85% of fed-cattle slaughter nationally.

On Tuesday, Nebraska cattlemen who were called to testify backed out, claiming they feared retribution from others in the market.

Earlier on Wednesday, Scott announced that one of four planned producer witnesses canceled, also allegedly out of fear of retribution.

"Witness intimidation is unacceptable, and it is not conduct befitting this institution," Scott said. "I never want to hear about a witness choosing not to come before our committee because of fear again. I am saddened and disappointed that we reached that point, and I will be following up on the incident."

Rep. Ro Khanna, D-Calif., asked, and the CEOs committed to, "encouraging" producers to share their stories openly in light of recent concerns about witnesses being unwilling to testify on cattle markets.

CEOs of the four packers were asked about what they see for the future of the cattle industry.

Tim Schellpeper, CEO of JBS USA Holdings Inc., said his company will follow the lead of cattle feeders and ranchers as to the direction the industry moves in the coming years.

"This is a cyclical business, and we're coming now into a cycle where perhaps the profitability will switch in the chain," he said.

Schellpeper was asked whether JBS has the intention of owning ranches. He responded, "No, I don't anticipate that happening in the future." Schellpeper said his company continues to expand packing capacity.

David MacLennan, CEO of Cargill, said his company would continue to "provide markets" for the ranchers to sell their cattle.

"I do believe that the cyclicality of this industry is starting to turn," he said.

"One of the witnesses from the prior panel talked about an eight- to 10-year cycle, and we are starting to see that the market, the supply and demand and components, and the prices in the cattle market are starting to change. We can't survive as an industry without the small family ranchers and farms that we depend on."

Donnie King, CEO of Tyson Foods, said that whatever the future holds, his company needs farmers.

"This industry can't survive without the ranchers and farmers supporting it," King said, "and the American food supply has proven to be a system that has proven to be incredibly resilient, as we saw the last two and a half years. But I think some of it is the cyclicality."

In his written testimony, King said the current geopolitical situation is creating shortages of inputs and resulting in higher costs that are hurting ranchers.

Though the Biden administration has pointed to consolidation in the meatpacking industry as a reason for higher meat prices, King said there is little correlation.

"The data doesn't support this claim," King said. "The concentration of the industry for commercial cattle among the four processors here today is 69% and has been virtually unchanged over the past 30 years. And in most of those 30 years, the profit margins of ranchers and cattle producers have been much higher than the low single-digit margins we've made as meat processors."

Tim Klein, CEO of National Beef Packing Company LLC, said the biggest economic strain on his company in the past year has been rising transportation and labor costs.

"That means that cattle prices either gotta go down by that much, or consumer prices have to go up in order for us to maintain the same profit margin. The biggest single factor we're dealing with right now is where we're at in the cattle cycle. There are simply more cattle available every week than there is demand and capacity to process those cattle."

Young told the committee that expanding slaughter capacity at the local level would help create more competition, such as the cooperative model considered in some regions.

"We as cattle farmers and ranchers just want an even playing field and be able to raise our families and live a decent life our fathers and grandfathers did before us," Young said.

"Nowadays in rural America, everyone in the farming community has one, two or even three extra jobs outside of the farm to help pay their bills and make ends meet. The cows no longer pay for themselves and have (not) been for a very long time now. I never thought I would see the day when feeding America will become a part-time job."

Gilles Stockton, a cow-calf producer from Grass Range, Montana, said the loss of cattle producers in the past several decades has hurt small towns.

"Now, I don't want to give you the impression that I'm looking for sympathy," Gilles said. "I've made my life, and it was a good life. But my concern is for my community, the future of agriculture and the future of food security for this nation. My community has, over the course of my life as a rancher, dried up and blown away like a tumbleweed."

Gilles said labeling American beef products and requiring beef packers to buy cattle in a "competitive and transparent marketplace that they neither own nor control" are two actions that could benefit farmers and ranchers.

Don Schiefelbein, a Kimball, Minnesota, cattle producer and president of the National Cattlemen's Beef Association, said cattle markets are the "most complex markets on Earth" but that their dynamics have been consistent.

"I implore you to listen to what producers are telling you," he said. "The hearing focuses on meatpackers; we share the committee's concern about the consolidation, but we would have preferred to discuss a host of more pressing challenges with you today. Make no mistake, curbing rapid inflation and skyrocketing input costs, addressing urgent labor shortages and increasing market transparencies are the true immediate needs of producers."

Schiefelbein said the Biden administration's efforts to expand packer capacity through new small and regional facilities are helpful, as well as establishing a contract library.

On the other hand, he said, the industry is frustrated the Department of Justice has provided no updates on an ongoing investigation into the packer industry.

The Holcomb, Kansas, packing plant fire and COVID-19 packer capacity losses resulted in the highest recorded spreads between box beef and live cattle at $67.17 per hundredweight and $279 per hundredweight, respectively, Schiefelbein said.

"This behavior is rooted in basic laws of supply and demand," he said. "But given the magnitude of these price disparities, it would have been imprudent not to further scrutinize the packers. The results of this investigation have yet to be released. But I urge Congress to proceed carefully as we await the findings."

Schiefelbein said there also is a need to have proper and effective oversight of packers.

"Well, the other thing that's awfully crucial, and again, it's the role of government as I see it, when people are in desperate need, that's when government comes in and provides them a safety net," he said. "What you've done with the drought assistance is superb, and in the immediacy that you provided that here just in the last week, I can't tell you how many phone calls I received, saying, 'Thank you very much.'"