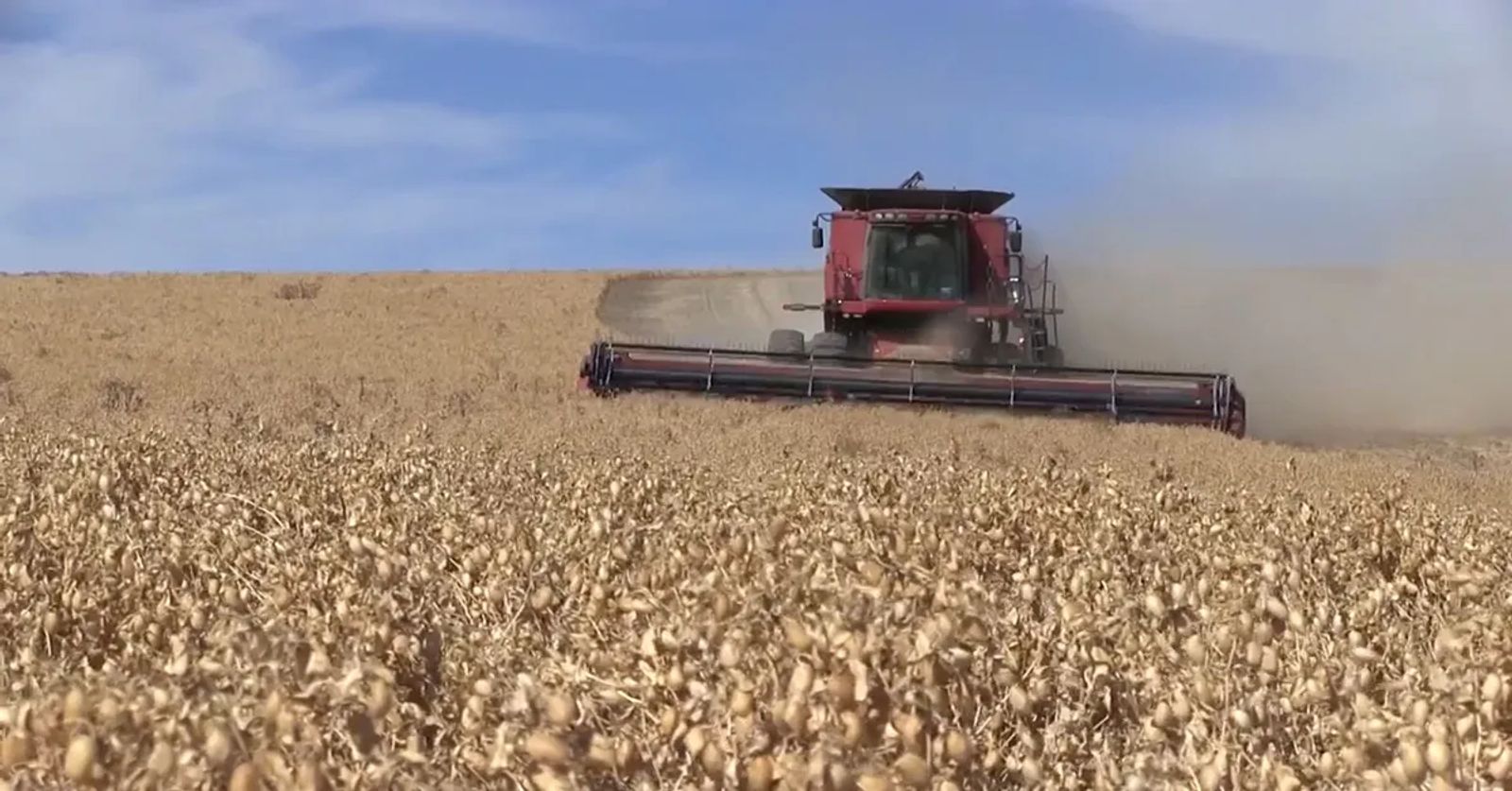 The USDA National Agricultural Statistics Service has released their 2020 harvest season crop production report, summarizing dry pea and lentil production so far, with estimates on chickpea production as well as the latest certified acreage data from the Farm Service Agency.

The forecasts in the report are based on growing conditions as of September 1. Since there have been widespread fires, and a few episodes of freezing temperatures in some pulse growing regions, the impact of these will not be analyzed until the next crop production report in October.

The month of August had a few extremes in growing conditions, from a Midwestern derecho event in the middle of the month, where wind gusts topped 120 miles per hour in spots, to an escalating drought across the northern High Plains, with a warmer than average rating. Toward the end of the month, the topsoil moisture was rated as at least one-half “very short to short” in the plains states, except North Dakota. However, harvest is still carrying on, and the USDA estimates that wheat and pulse harvest is nearing completion, except for chickpeas of course.

The USDA NASS production report relies on “objective yield and farm operator surveys” of approximately 9,100 producers gathered between August 25 and September 7 to estimate yield. NASS conducts these farm operator surveys by telephone primarily, with some use of mail, internet, and person-to-person interviews. NASS published no specifics on the number of pulse growers surveyed.

Lentil production is forecast to be up 21 percent from last year, although growers harvested less lentils last year than the previous year, so that increase is not as dramatic over a five-year average. The estimate is 6.5 million hundred-weight (cwt) or 330,000 MT, with a planted acreage of 518,000 acres, up 7 percent from last year. Harvested acreage is 486,000 acres, an increase of 13 percent. Growers estimate expected yield to average at 1,338 pounds per acre, up 88 pounds from 2019. NASS estimates that Montana has approximately 89 percent harvested as of the end of August, North Dakota at 48%. These are both ahead of last year by this time, but behind in the 5-year average of 58% completed.

Dry pea production is down 17% from last year, at 18.5 million cwt, or approximately 940,000 MT. Area planted to peas is estimated at 999,000 acres, up 5 percent from the June projections, but down 9 percent from 2019. Of this amount, area harvested is forecast at 949,000 acres, down 10 percent from 2019. Dry pea growers estimate average yield to be 1,953 pounds per acre, down 171 pounds from 2019. Growing conditions in Montana and North Dakota were quite good, despite some drought, and was 82-92% completed as of the end of August. These figures include Austrian Winter Peas and wrinkled seed peas.

With chickpea harvest just beginning in some growing regions, these NASS numbers are almost entirely projected. Area planted for all chickpea regions for the 2020 crop year is around 254,000 acres, 44 percent down from last year, while area harvested is forecast at 249,200 acres, down 38% from 2019. The estimate that chickpea acreage would decline by a third of the previous year published in the June NASS projection report will be deemed close to reality if this September report is accurate. Small chickpea acreage planted is estimated at 40,000 acres, down 62% from last year, with area harvested forecast at 38,800 acres, a decline of 58 percent from 2019. For large chickpeas, area planted is estimated at 214,000 acres, while area harvested is projected to be 210,400 acres, declines of 38% and 32% in that order. It is too early for NASS to project chickpea yield.

The figures in the these crop summaries are rounded up and down for ease of reporting. For exact figures, examine the 5-year production table on Pg. 5, prepared by Kara Russell, Marketing Assistant in Grants and Statistics. Look for a breakdown by state, commodity, and variety in a special USA Dry Pea & Lentil Council production report in the following weeks. 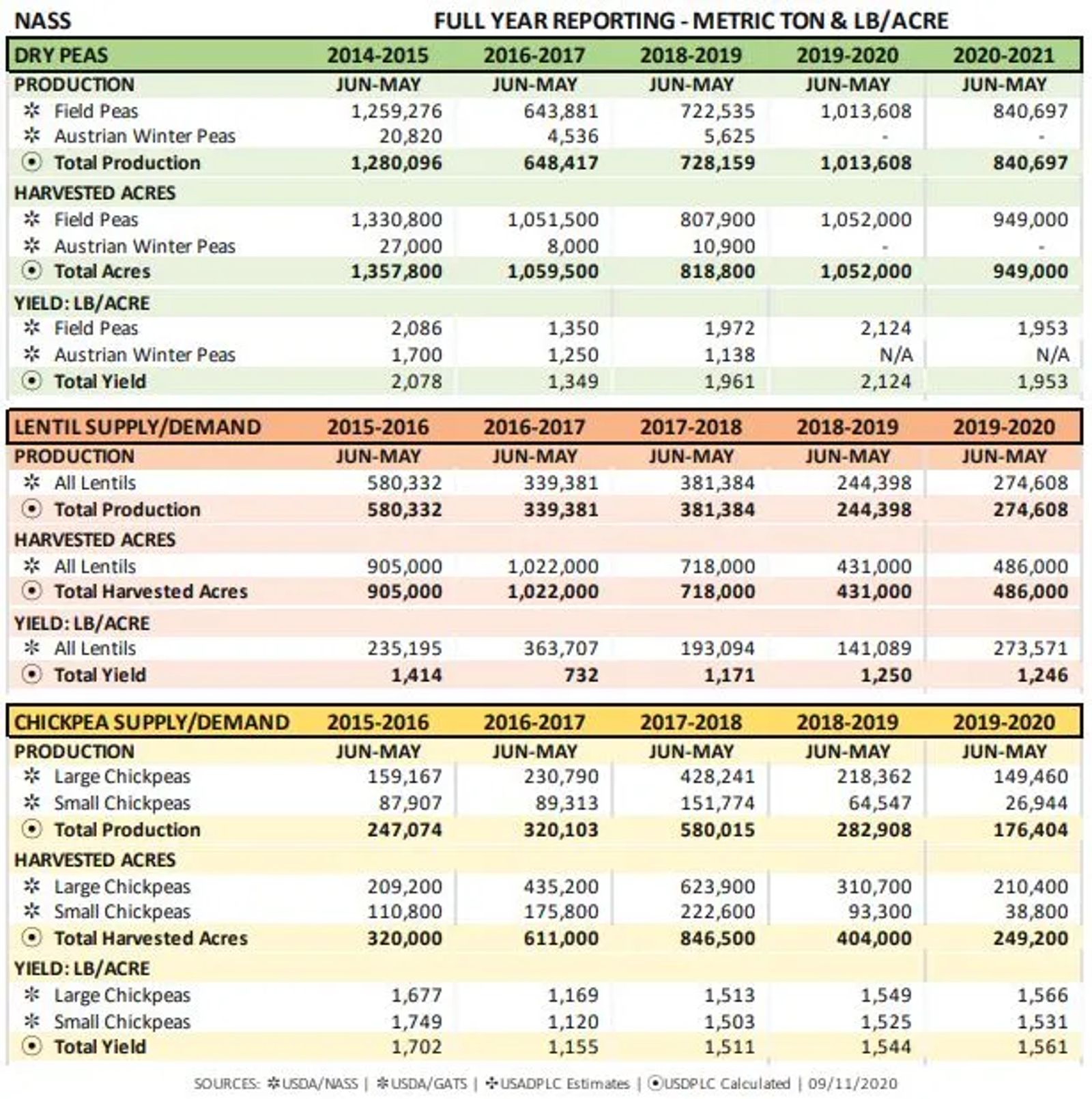