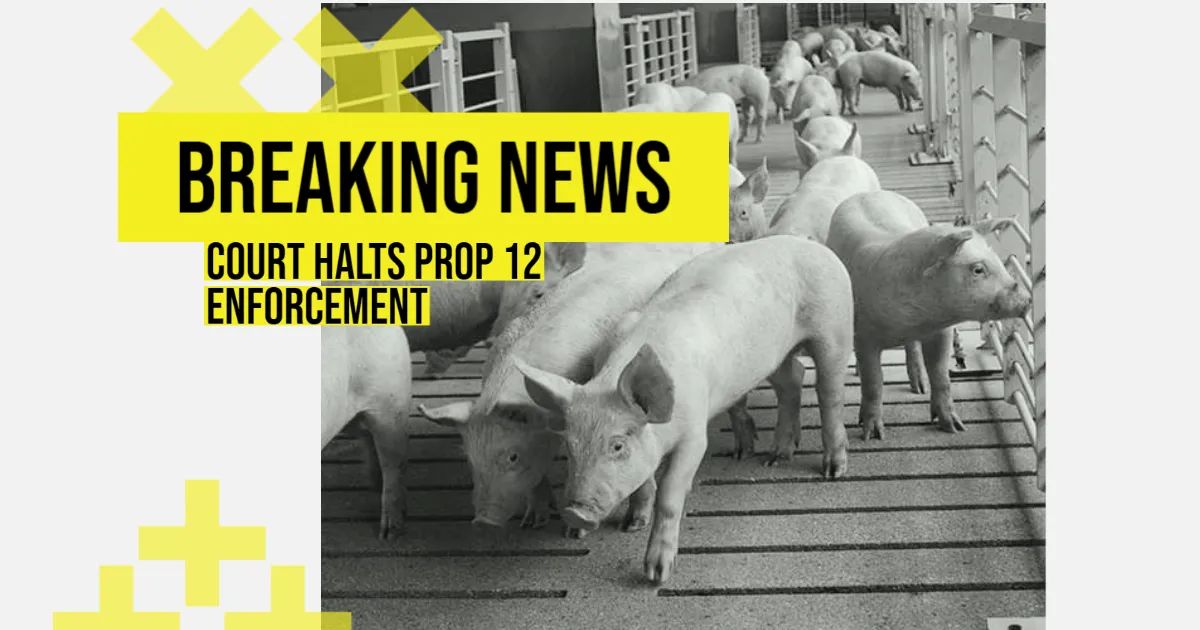 A California court halted the enforcement of Proposition 12 on Monday, moving back enforcement of the animal-welfare law to six months after rules are finalized.

The California Department of Food and Agriculture is more than two years late in finalizing rules for the law that places animal-welfare restrictions on pork producers who sell products in the state.

In addition, the Supreme Court continues to delay a decision on whether to consider a petition on Proposition 12 filed on behalf of the National Pork Producers Council. Though the court issued orders on Monday that included accepting a petition on the Clean Water Act and other cases while denying other petitions, the court did not accept or deny the NPPC challenge.

The Supreme Court's next scheduled conference is set for Feb. 18.

Proposition 12 went into effect on Jan. 1. The law bans the sale of pork from hogs that don't meet the state's new production standards. A federal appeals court upheld the law.

The law requires hog producers to abide by certain regulations to sell pork in California. Voters in the state passed Proposition 12 in 2018 with nearly 63% of voters supporting it. The law forbids the sale of whole pork meat in California from hogs born of sows not housed in conformity with the law. Proposition 12 forbids sows from being confined in such a way that they cannot lie down, stand up, fully extend their limbs, or turn around without touching the sides of their stalls or other animals.

The National Pork Producers Council argued in briefs filed with the Supreme Court that the law violates the Commerce Clause by regulating businesses beyond its borders.

In the California state case, state officials argued in court filings the pork and grocery industries should be subject to penalties if not in compliance with Proposition 12, even if rules for the program have yet to be finalized.

"The state respondents assert that much of the act is clear enough to enforce without additional guidance from" the state, the court said in its ruling.

"To be sure, the square-footage requirements and many of the act's definitions are explicit. Again, the act offers no guidance about the steps sellers must take before they should know that a particular product is traceable to a breeding pig that at some point in the distribution chain was confined in fewer than 24 square feet."

The ag and grocery groups had asked the court for a 28-month delay on enforcement, but the request was denied.

"The court must be mindful of the act's concern about cruel confinements, and the enforcement delay must not exceed a period that is necessary," the court said.

"Judge Arguelles' decision recognizes the complexity of the pork supply chain and the burdensome and costly provisions of Prop 12," she said in a statement.

"To enforce the law without final regulations leaves the industry unsure of how to comply or what significant changes must be made to provide pork to this critical market."