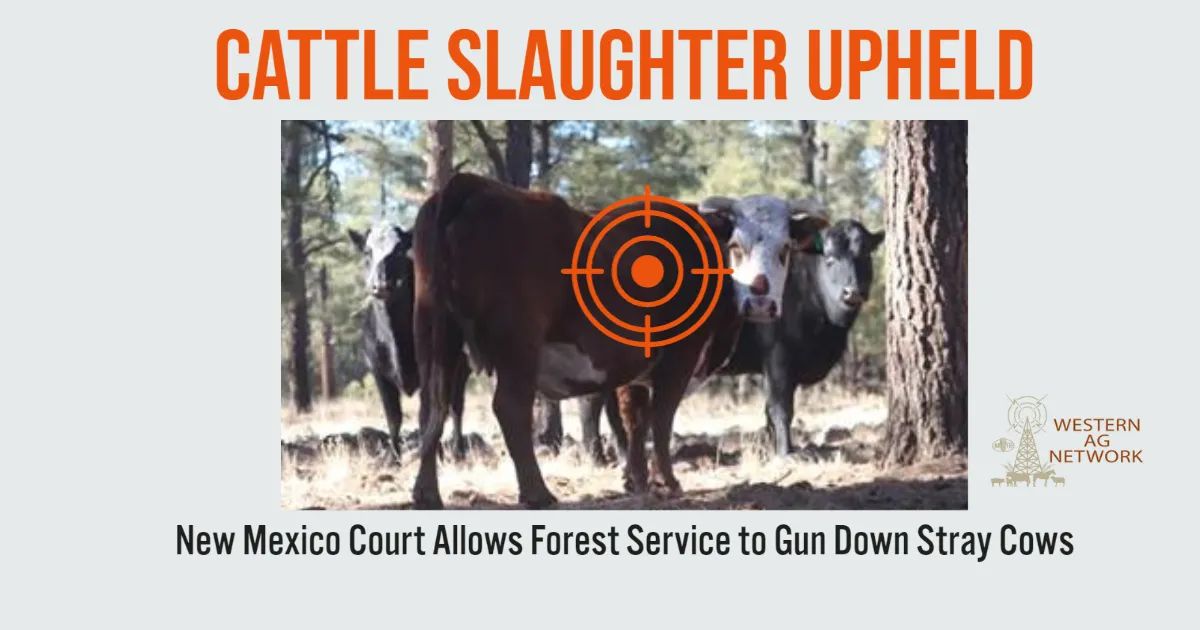 The New Mexico Cattle Growers’ Association (NMCGA) and others filed a complaint Thursday, February 9th in federal district court for New Mexico to stop the U.S. Forest Service (USFS) from gunning down estray cattle in the Gila Wilderness. NMCGA asked the Court to enter a restraining order to stop the aerial slaughter that the USFS has scheduled Thursday, February 10th – Friday, February 11th. After an emergency hearing, the Court denied that application for a restraining order.

“Today is a sad day for the livestock industry”, said Loren Patterson, President NMCGA. “The federal government has made up rules about what it can do, regardless of whether it was given that authority and regardless of whether its action violates New Mexico state law. Killing of cattle by a government sniper from a helicopter is inhumane. Cattle will be wounded and suffer, calves will be left motherless. It is appalling and hypocritical that animal rights organizations have not voiced a strong protest and instead support these actions.”

The USFS stated they have located three separate herds of cattle totaling 150 head and intends to shoot all cows, calves and bulls; allow the carcasses to rot where they lay. NMCGA and others have concerns with carcasses being left for wolves, bears and lion.

“We do not want predators to develop a greater taste for beef”, said Patterson.

The plans to move forward with shooting must be completed over the two days due to contracted sharp shooter availability, and time of the year which considers the conclusion of hunting season and prior to the Spotted Owl nesting season in the Gila. The cost of two days of aerial gunning is $40,000.

According to producers in the area, the USFS has not made a good faith effort to gather the estray cattle. Instead the Service has opted to shoot the cattle in compliance with a settlement agreement with the Center for Biological Diversity (CBD) who previously sued the USFS for allowing the cattle to harm the riparian areas in the Gila.

“The USFS is establishing dangerous precedent to appease the Center for Biological Diversity”, said Patterson. “Shooting cattle is not a long-term range management solution and the USFS should know that. This issue stemmed from years of Service mismanagement and vacated grazing allotments. Until now vacant allotments are released to qualified cattle growers, estray cattle will continue to be a problem. This situation took years to create and a final solution may take years to ethically achieve.”

Other comments on Facebook have pointed out that if the USFS announced an ariel slaughter of feral horses, "the world would be up in arms."