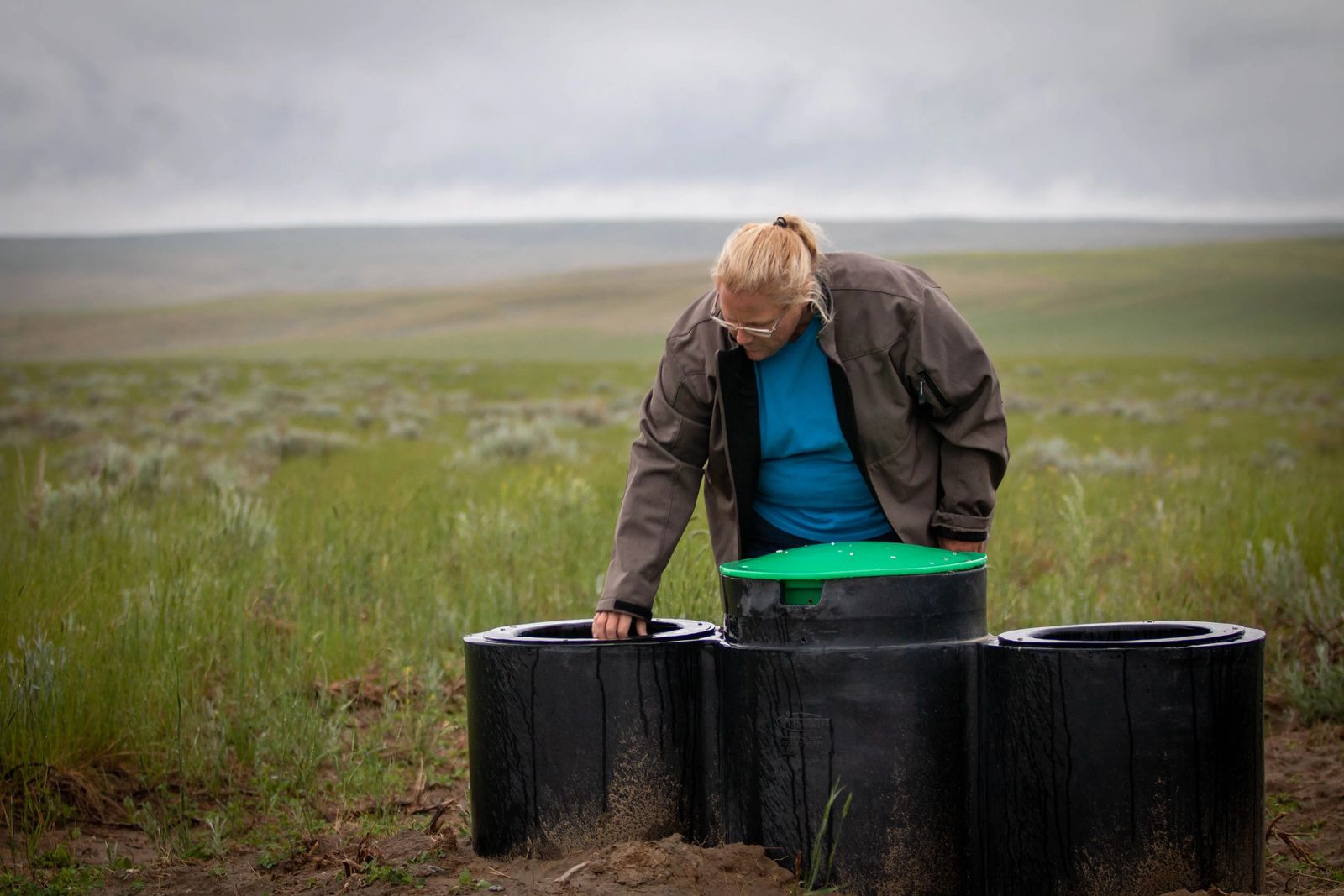 Building a herd and hope

The old homestead still stands sentinel on the hill.

Weathered, worn and abandoned long ago, Heather Martin has often looked at the relic and wondered just how the brother-sister duo who claimed this parcel more than a century ago thought they could make a living off such a small sliver of sandy soil.

“There’s no well, no running water, and when this reservoir dries up, there’s nothing,” the Phillips County rancher says, nodding to the still pool nestled in the natural basin. “Maybe they got more rain back then, maybe it held more snow – I just don’t know. It had to have been a tough living.”

As decades wore on, making a living on that land didn’t get any easier. It was plowed, then entered into the Conservation Reserve Program (CRP) in the 1990s, indicating it was considered marginal cropland, at best. Planted to crested wheatgrass, a non-native but prolific species, it was left to weather the elements like the homestead decades before. The crested wheatgrass took root and covered the bare ground as intended, but wildlife search for tender, native grasses to graze. Dead growth became a barrier to new life.

Still, like many before her, Heather Martin saw opportunity.

“I was trying to grow; we were running out of ground. I was just trying to make it work, this ranching deal,” she says. “It’s all I’ve ever wanted to do. I’ve known that since I was eight years old.”

As decades wore on, making a living on that land didn’t get any easier. It was plowed, then entered into the Conservation Reserve Program (CRP) in the 1990s, indicating it was considered marginal cropland, at best. Planted to crested wheatgrass, a non-native but prolific species, it was left to weather the elements like the homestead decades before. The crested wheatgrass took root and covered the bare ground as intended, but wildlife search for tender, native grasses to graze. Dead growth became a barrier to new life.

Still, like many before her, Heather Martin saw opportunity.

“I was trying to grow; we were running out of ground. I was just trying to make it work, this ranching deal,” she says. “It’s all I’ve ever wanted to do. I’ve known that since I was eight years old.” 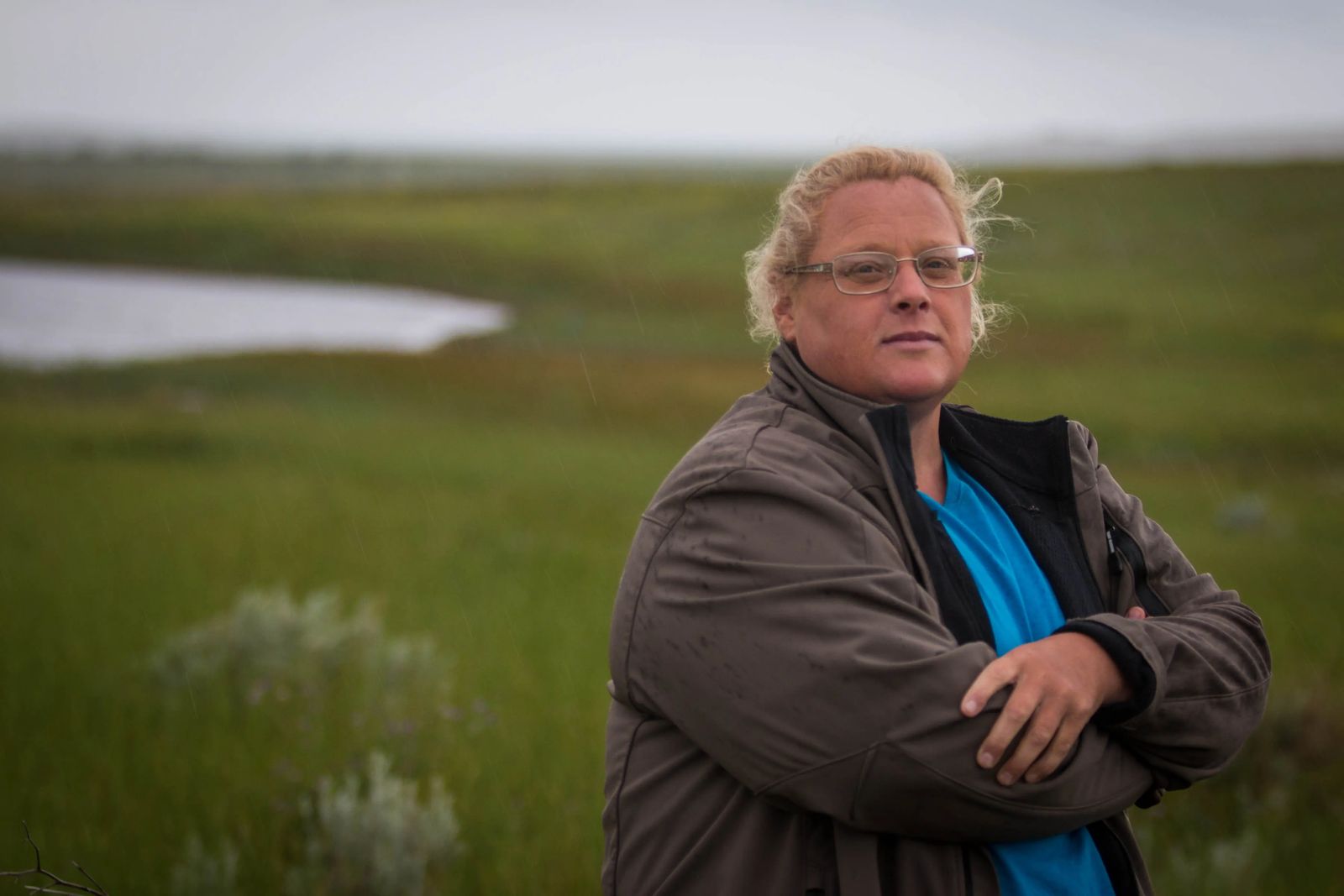 Cattle, like the wildlife before, would likely turn their noses up at the brittle, nutrient-poor overgrown and dead vegetation, and Martin feared it was a tinder box of bad luck waiting for a lightning strike and an uncontrollable blaze.

She knocked down what she could with a swather and baled the worst stands the year she bought it. With a land payment pressing, there was no time for further renovations. The dilapidated fence line was ragged at best – “That first year, I was getting heifers in every day. Every day! But what could I do? I had to use it.”

A previous owner had interspersed some alfalfa seed, and native vegetation began inching its way back in. With the first stand knocked back, she bought 600-pound heifers to develop and sold them at 1,000 pounds.

“It’s a producing little pasture,” she says, sure of its potential to grow the nourishment needed to expand her Red Angus breeding program. It’s the perfect spot for developing heifers or for her A.I. and embryo transfer cattle.

“I love yearlings; I love calving heifers, too. I know a lot of people don’t like to bother with it – it’s hard!—but I like the challenge,” Martin says. “I like that you get to be the one who see her ‘get it’ for the first time. You get to teach them, in a way.”

But the land was ready to teach her the same lesson it doled out to generations of westerners before: dreams, ambition, hard work and know-how doesn’t mean much without water.

“In 2017, I hauled water every day to this pasture. The reservoir dried all the way up. If you’ve ever had to haul water, you know – I’m haying, trying to get everything else done, and it’s up at 4 or 5 o’clock in the morning to haul water, then off to work or to help someone else on their place and back at 11 o’clock at night to fill the trough,” she recalls. “My heart is here – these cows, they’re my heart – but I don’t know. Sometimes you wonder if it makes sense, if it’s really worth it, you know?” 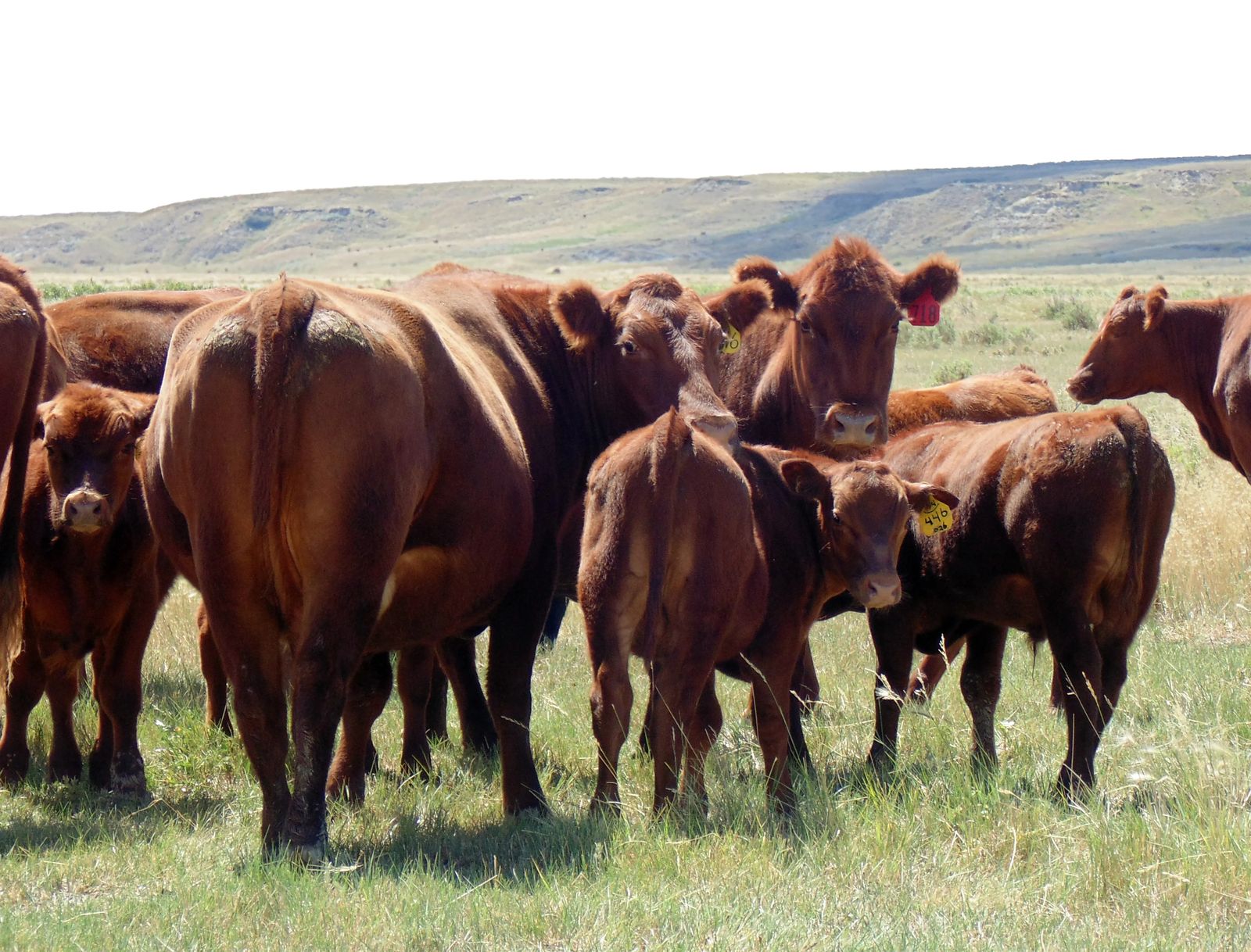 Hope in a hard time

﻿“In 2017, the panic was on – everyone in Phillips County was out of water,” Sage Grouse Initiative Rangeland Conservationist Martin Townsend says. “That summer was a record-setting drought, so it really highlighted where people were low on water. At that point, available water became the most limiting resource for agricultural production.”

When Heather Martin approached the local Farm Service Agency office for potential water development funding, she learned that due to high demand, it would be at least a year before cost-share funding would be available. Instead, she was directed to the Natural Resources Conservation Service to inquire about new conservation funding available through the Ranchers Stewardship Alliance (RSA). There, she was introduced to Martin Townsend, who is hired by the Soil and Water Conservation District of Montana to work in the Malta Natural Resource Conservation Service office doing conservation planning and contracting. Townsend also serves as RSA’s volunteer Conservation Committee Coordinator.

The Ranchers Stewardship Alliance was formed in 2003 as a rancher-led conservation organization based in Malta, Montana. The organization’s mission is to help multi-generational and beginning ranchers build the collaborative, trusting relationships and community-based solutions they need to create healthy working landscapes and vibrant rural communities.

In 2017, RSA was awarded a $300,000 grant from the National Fish and Wildlife Foundation’s Northern Great Plains Program for local rangeland improvements to benefit grassland birds, rangeland health and working landscape through livestock grazing. 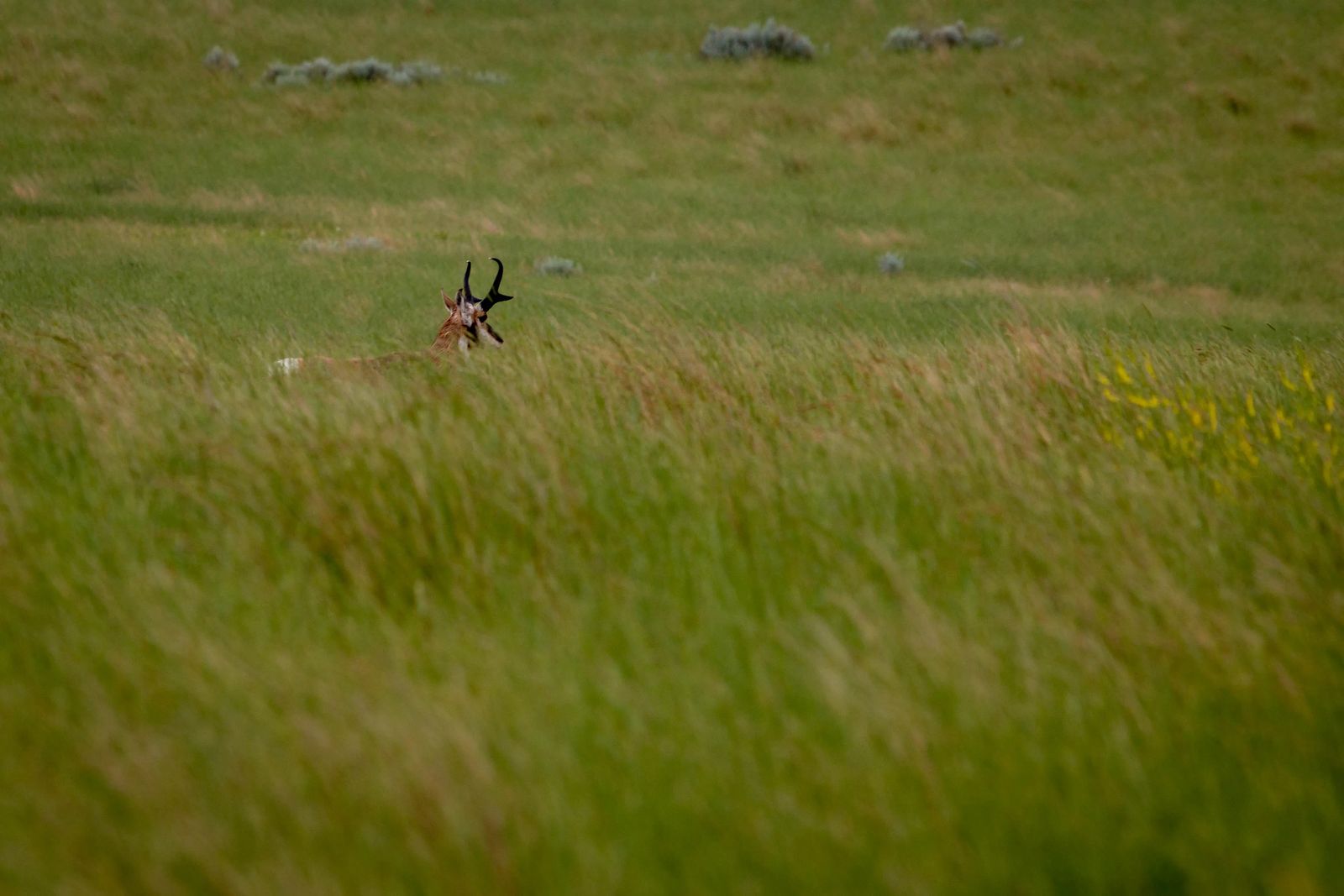 “The first phase of that grant money was specifically focused on expiring CRP land that could be put into a grazing system,” Townsend says. “The goal is to reduce the risk of cultivation and keep grasslands for grassland birds, while supporting working lands, ranching and the rural community.”

Heather Martin’s project was the perfect fit, smack in the middle of priority habitat for grassland birds like the chestnut-collared and McCown’s longspur. The pasture also falls just outside the core area near a sage grouse migratory corridor and has several active leks (breeding grounds) within a five-mile radius.

It marked all the boxes in promoting biodiversity and healthy wildlife habitat, but most rewarding, Townsend says, is that it offered resilience to a rancher working to grow her herd.

“We want her operation to be functional, because when it is, it’s functional for wildlife, too,” Townsend says.

To do that, the RSA Conservation Committee proposed to drill a new well, install 6,000 feet of livestock pipeline, install two fiberglass water tanks with bird ramps and construct 1.2 miles of perimeter and internal fencing. With a nearly one-to-one match, Martin purchased the tanks and labor to construct the fencing and in turn, the Ranchers Stewardship Alliance would pay to install the well, pipeline and purchase fencing supplies.

“It’s a godsend,” Martin says. “In less than eight months, I had water on this place. I couldn’t believe it.”

Resilience for a first-time rancher

The pickup bounces across what may have once been farming tracks in the hip-high, new growth.

“I’m still getting to know this little pasture,” Martin says. “It takes time to really get to know a piece of land; to know what grows, what does well, the lay of the land.”

The new water system has allowed her to look at this land differently. When she relied on the reservoir for water, it could only be grazed in early spring when water ran. In the first year after the well was drilled and pipeline installed, she was able to experiment with winter grazing with cattle foraging into December. Now, she can rest the pasture through the spring and summer to allow fresh regrowth.

She’s not the only one reaping the benefits of the reinvigorated landscape.

She’s mid-sentence when she stops the pickup abruptly and points: “Grouse.”

There, nestled in the swaying sweet clover, the female sage grouse finds cover. Earlier in the spring, the shorter, new grass would be ideal for songbirds, and throughout the year, antelope move through the landscape. In recent years, Martin has seen more elk making their way through her pastures, and one year, she spotted a rogue moose.

“That’s the beauty of a grazing system,” rancher and RSA Conservation Committee chair Sheila Walsh says. “It creates diversity on the landscape that a variety of wildlife needs to thrive. But what’s just as important to us is that it can allow a young rancher to thrive, too.”

Martin still has more fencing work to complete her end of the RSA conservation match. The cross-fencing will help her create an even more detailed grazing plan and add more options to her breeding program. As she develops her herd, she’s working toward more purebred breeding stock to sell. She’s in her second year offering registered Red Angus bulls in collaboration with the Rough Country Breeders sale and sees opportunity to offer more.

“I just love what I do,” she says. Sticking with it involves a lot of stubbornness, she laughs, but it also requires a bigger team. “Starting out on my own and building my own program has been hard,” she says. “But I’ve had a lot of people pulling for me in places I needed them. And for that, I’m thankful.”

About Ranchers Stewardship Alliance, Inc.: In 2003, about 30 ranching families in northern Montana came together to resolve common problems they faced. Now known as RSA, this rancher-led conservation organization works to strengthen our rural community, economy and culture. Our mission is to help multi-generational and beginning ranchers build the collaborative, trusting relationships and community-based solutions they need to create healthy, working landscapes and vibrant rural communities.

About the National Fish and Wildlife Foundation: Chartered by Congress in 1984, the National Fish and Wildlife Foundation (NFWF) protects and restores the nation’s fish, wildlife, plants and habitats. Working with federal, corporate, and individual partners, NFWF has funded more than 5,000 organizations and generated a total conservation impact of $6.1 billion. Learn more at www.nfwf.org