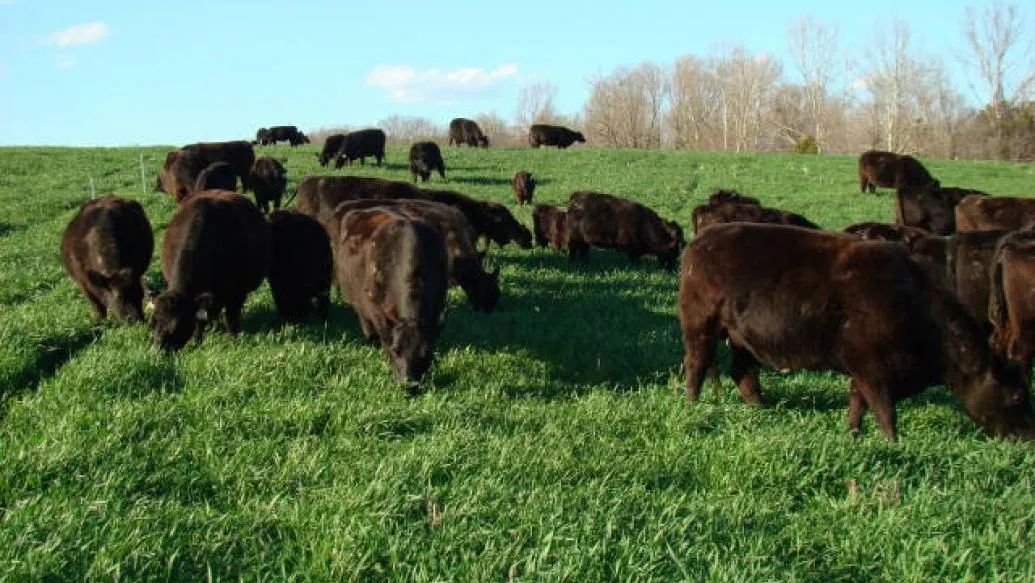 Test Forages for Nitrate Before Haying or Grazing

Forages typically are the major component of beef cattle diets and some may have the potential to contain toxic levels of nitrate.

According to the National Agricultural Statistics Service, North Dakota producers planted 70,000 acres of hay and haylage last year. Many of these acres consist of annual forages, small grains and cover crops.

"Although these forages are a great option for haying or grazing, they could pose a risk of nitrate toxicity for livestock," says Janna Block, livestock systems specialist at NDSU's Hettinger Research Extension Center.

Nitrate toxicity is a potential issue for livestock consuming small-grain forages (wheat, oats, rye, triticale and barley), brassicas, millet, sorghum and sudangrass, and standing corn or corn used for hay. Although nitrates typically are not an issue on rangelands, pastures with nitrate-accumulating weeds such as kochia, lambsquarters, pigweed, quackgrass and thistle also may be a problem. Nitrate toxicity is most commonly a problem in ruminants, with cattle more susceptible than sheep.

“Nitrate is a common form of nitrogen found in the soil, which is taken up by plants and converted to protein through the process of photosynthesis,” Block explains. “Under normal growing conditions, nitrate does not accumulate in the plant. However, when plants encounter stressful growing conditions, photosynthesis is inhibited and the potential for accumulation of nitrates is increased.

“In general, people associate an increased risk of nitrate toxicity with drought,” Block adds. “The current U.S. Drought Monitor for North Dakota indicates that over half of the state is abnormally dry for this time of year, mainly in the western counties.”

Block notes, “It is important to recognize that drought is not the only condition that can lead to nitrate accumulation. Prolonged cool temperatures and cloudy conditions also can disrupt the conversion process and cause nitrate to build up in plants. Additionally, nitrates may accumulate due to conditions that reduce leaf area and limit photosynthesis, such as frost, hail or disease.”

When beef cattle consume increased quantities of nitrate, it overwhelms the ability of rumen microbes to convert nitrate to protein. This results in a buildup of nitrite in the rumen, which is 10 times more toxic than nitrate.

Excess nitrite is absorbed into the bloodstream, which removes the blood’s ability to carry oxygen and causes the animal to suffocate. Cases of lower-level, chronic toxicity also can occur. In those cases, producers may observe weight loss, night blindness and abortions in their cattle.

Here are several strategies to reduce the risk of nitrate toxicity:

“Producers planning to graze nitrate-accumulating forages should take additional steps to minimize risks,” Block advises. “Nitrate concentration can be extremely variable within areas of a field, and predicting and managing grazing animals’ intake is difficult.”

Here are some other ways to help reduce the nitrate risk:

“The most important recommendation is to test for nitrates prior to grazing or haying,” Block says.

Many NDSU Extension offices have access to a Nitrate QuikTest, which is a screening tool to assess whether nitrate is in standing forage. Extension agents who have been certified can conduct the test in a field or office setting. Producers should provide a representative sample of at least 20 stems by clipping them to ground level while traveling in a zigzag pattern across the field.

“If nitrates are present in the sample, producers should delay grazing or harvesting for several days and then re-test,” Block says. “Samples also can be submitted to a laboratory for quantitative analysis to further assist with management decisions.”

The Nitrate QuikTest is not designed to evaluate nitrate content in harvested forages. The best testing strategy for forages that have been cut and baled is to use a bale probe to collect core samples and submit them to a laboratory for analysis.

Ideally, 10% of bales or at least 20 core samples per lot of forage should be collected. A lot is defined as hay harvested within 48 hours from the same field.

Nitrate concentrations do not decrease through time in stored forages because photosynthesis is required for conversion of nitrates in the plant. Ensiling can decrease nitrate content through fermentation, but samples still should be submitted for analysis to determine accurate levels.

“Producers need to understand the potential risks of nitrate toxicity and the factors leading to nitrate accumulation in plants,” Block says. “Determining actual levels of nitrate present in grazed and harvested forages hay is critical to be able to utilize these feedstuffs in a safe manner.”