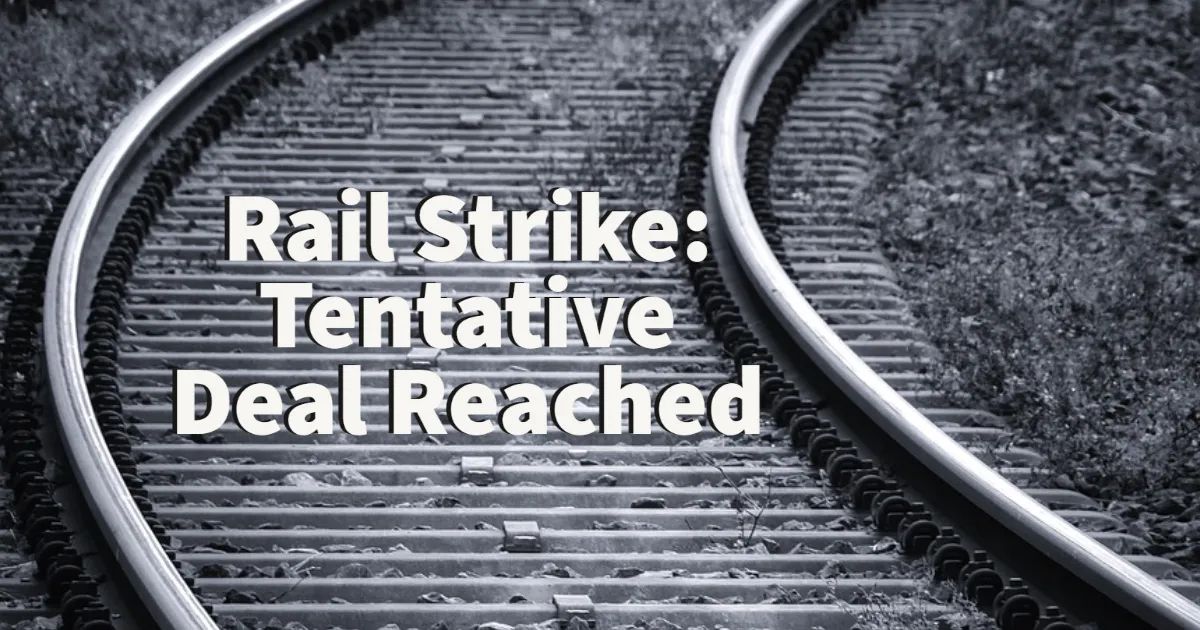 President Joe Biden early Thursday announced overnight negotiations between major railroads and unions had reached a tentative agreement to avoid a nationwide rail strike that was set to occur Friday.

The deal, if culminated, would bring a sigh of relief across the agricultural and biofuels supply chain. Agricultural groups this past week had increasingly called on Congress to prepare to step in to block a potential strike that would have gridlocked commodity supply chains at the beginning of harvest.

The White House released a statement from President Biden after the labor deal was brokered by Labor Secretary Martin Walsh. Biden called the tentative deal a win for rail workers, the railroads and the overall U.S. economy.

"The tentative agreement reached tonight is an important win for our economy and the American people," Biden said. "It is a win for tens of thousands of rail workers who worked tirelessly through the pandemic to ensure that America's families and communities got deliveries of what have kept us going during these difficult years."

Associated Press reported Biden made a phone call to Labor Secretary Marty Walsh at 9 p.m. as the talks were ongoing, according to a White House official.

Averting a strike avoids the risk of an immediate spike in food, fuel and other prices as inflation is already a major challenge economically.

Specific details on the agreement were not released. The talks involved twelve unions representing more than 100,000 engineers, conductors, mechanics and other railroad workers.

"These rail workers will get better pay, improved working conditions, and peace of mind around their health care costs: all hard-earned," Biden said. "The agreement is also a victory for railway companies who will be able to retain and recruit more workers for an industry that will continue to be part of the backbone of the American economy for decades to come."

Walsh began meeting Wednesday with the heads of unions representing engineers and conductors, and railroad negotiators. The conductors and engineers are the two key unions holding out and they make up more than half of all the rail workers involved in the labor talks.

The International Association of Machinists and Aerospace Workers had said Wednesday its 4,900 members rejected the latest proposal reached with the Class I railroads.

Amtrak was already canceling its long-distance routes on Thursday as a precaution as well.

Agriculture was seeing some early impacts as well. Late last week, the railroads started dialing back shipments considered hazardous materials. That was starting to impact shipments of products such as ammonia fertilizer as well as ethanol.

The American Farm Bureau Federation, National Grain and Feed Association and The Fertilizer Institute were among the groups that had called on Congress to prepare to immediately step in to block a strike if no deal was reached.

"If a deal isn't reached by Friday or there isn't some type of extension, we're going to make it very clear that we need quick congressional action," said Mike Seyfert, CEO of the National Grain and Feed Association, in an interview with DTN on Wednesday. "This would be devastating for the food and ag commodities, as well as the broader economy."

At this point, Seyfert said told DTN on Wednesday there are going to be some immediate supply chain issues just based on how much the railroads have already dialed back services.

"Even without a strike, Friday is going to be a pretty slow day so there are going to be some disruptions in the system," Seyfert said.

Geoff Cooper, president of the Renewable Fuels Association, on Tuesday told reporters a strike "dire situation" for the ethanol industry and likely force ethanol plants to idle just due to limited storage capacity.

"Seventy percent of the ethanol we produce in the U.S. is shipped by rail," Cooper said. "So this is a very, very concerning issue for us. We've already been experiencing in the ethanol industry poor rail service. It's been a precarious situation across that supply chain for quite some time coming out of the pandemic."