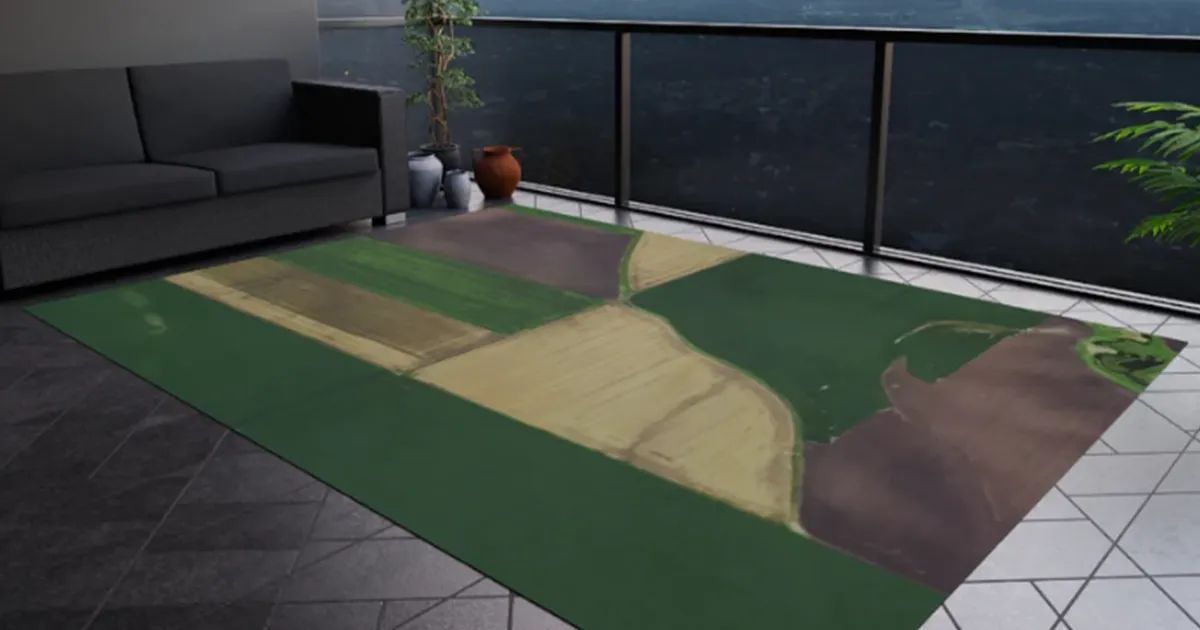 Carpet farming is serious business. If you don't believe it, look to a new business started by Nathan Faleide. The North Dakota entrepreneur turns satellite images of farm landscapes into realistic rugs fit for your fleet of toy implements.

The company, called Boundri, combines Faleide's knowledge of imagery and farming to create realistic and usable art. So far, efforts have been focused on play rugs, but he can also create maps that can be printed as everything from canvas wall art to wallpaper that turns a farm office into the equivalent of a war room for staging field operations.

Coffeyville, Kansas, farmer and agronomist Zach Townsend couldn't resist having a rug made to resemble his grandparents' farmstead and the fields that surrounded it.

"I had childhood memories of playing farm on the carpet and recreating the farmyard on the living room floor," Townsend told DTN. He gifted the rug to his parents so they can enjoy watching their grandchildren "farm" as he once did.

Maybe it is the kid in Faleide or his love of farm toys or the fact he has three young children of his own, but play rugs were the first spark of inspiration behind the Boundri business.

He'd been looking for a product to launch -- something different and undiscovered. Faleide has a genetic link to the inventive side of business. His father, Lanny, built some of the first farm software used to create variable-rate maps using satellite imagery. The company, Satshot, became a leader in remote sensing.

"I grew up on the farm and was surrounded by ag technology and have nearly 25 years of working within the precision agriculture/mapping industry," Faleide said. "But I've always had an idea I wanted to do more imagery-based art."

He'd seen generic play rugs for children that featured roads and towns, but what if ... When he rolled out the first prototype, his children instantly began pulling out farm toys and became engaged in play. He snapped a photo and sent it to a friend, who posted the photo on Twitter, and orders started rolling in.

Faleide is in the process of designing software that will allow customers to self-select the location to be printed. Right now, he's hand creating each map for clients based on imagery available from public sites or his own personal resources. Customers fill out a form and provide a location based on global positioning coordinates or legal descriptions. Sometimes photos help supplement the process if the farmer client wants buildings or grain bins added, for example. He creates a proof of the proposed rug for the client, and when everyone is happy, he hires the printing done on a contractual basis. From the time an order is placed to competition is usually seven to 10 business days.

Custom rugs range in size from 4 feet by 6 feet to 8 feet by 10 feet and cost from $180 to $400. "They aren't exactly to scale with farm toys, but kids generally don't care about that," he noted. There are also generic farm scenes available that start at $75. The rugs are lightweight, have a rubberized back and can be folded. They are washable.

While Faleide said he just barely had the rug under his feet with this business when about 230 orders flowed in. "The system I'm building will make this all much more automated, and I will be adding all kinds of things to our product offerings," he said.

In the meantime, the next generation of carpet farmers are acquiring some very unique properties.