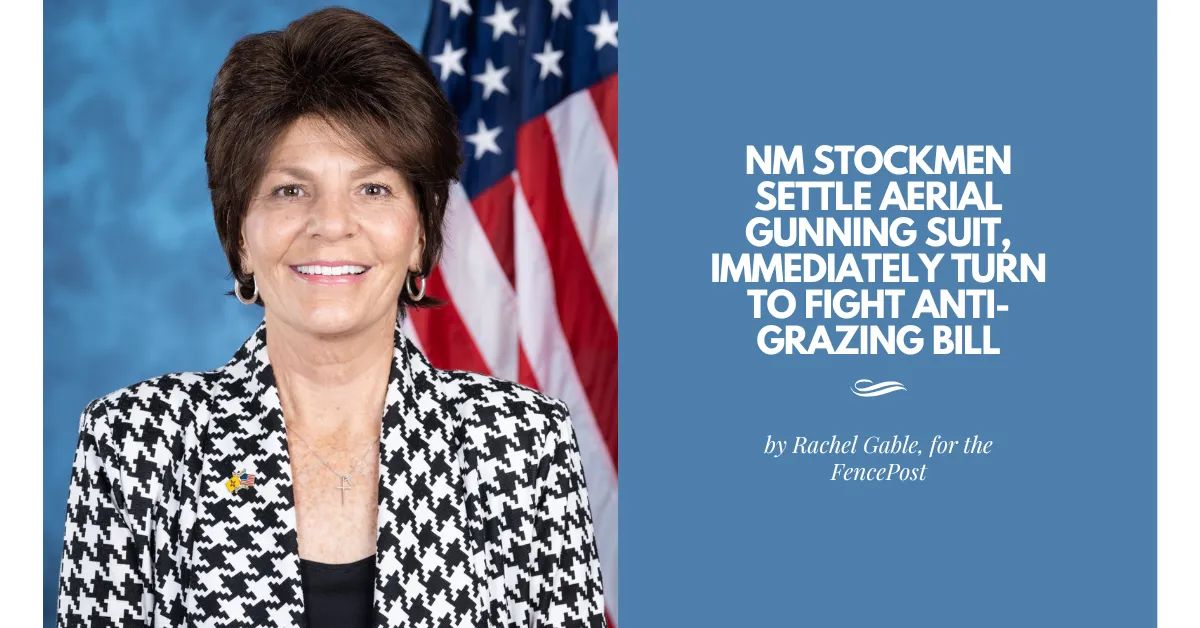 Rep. Yvette Herrell, R-N.M., has added language to a bill funding the Department of the Interior that would prevent the government from slaughtering feral cattle in New Mexico without consultation with local ranchers, as the U.S. Forest Service did last year to great outrage.

“Despite objections from local ranchers, the Cattle Growers’ Association, the New Mexico Livestock Board, and others, the federal Forest Service slaughtered dozens of wild cattle from helicopters in the Gila National Forest earlier this year,” said Rep. Herrell. “This method was inhumane, risked leaving orphaned calves starving to death, contaminated waterways with carcasses, and ignored the possibility of increased wolf activity. I’m glad we are able to rein in the Forest Service from running roughshod over local expertise and wishes in the future — the people of New Mexico deserve a voice, and it is finally being heard.”

This is the new language in the Appropriations Committee Bill Report:

“Cattle in the Gila National Forest — Prior to taking action on feral livestock on the Gila National Forest, the Forest Service is directed to consult and collaborate with local stakeholders on potential solutions and to consider possible consequences of such actions or inaction, including increased wolf activity and the feral livestock’s impacts on native vegetation, erosion, fish and wildlife habitat degradation, and water quality and quantity. The committee notes that such consultation and collaboration must be documented in writing to notice all parties involved.”

New Mexico Cattle Growers Association president Loren Patterson said the grazing allotment where the estray cattle are located was abandoned decades ago, the result of a family ranch going bankrupt. The bankruptcy, he said, was brought on by a lengthy lawsuit the family was embroiled in against the USFS.

Cattle remain on the allotment now and previous attempts by the USFS to remove them through the use of contractors have failed. New Mexico is a “fence out” state leaving the burden of removing the cattle on the landowner, USFS.

“They never finish the job,” he said. “So they just repopulate right back to where they were in a couple of years.”

He said it’s likely that if the USFS allowed grazing on the allotment, the cattle could be gathered with others. Or, had the USFS not destroyed all of the waters, fences and working facilities on the property, gathering to move 11 miles down logging roads would likely be possible.

“Everybody still has to get together and determine the best way to get those cattle out,” he said. “I don’t see how they get those cattle out humanely without building some sort of — even if it’s temporary — infrastructure in there to hold the cattle and a road that can bring them out. Currently, they have to lead them out 11 miles, one or two at a time, and that’s not working.”

The area, however, is designated as a wilderness area making the construction of infrastructure complicated. USFS though, he said, would have had to seek and be awarded an exclusion to fly low enough in the helicopters to shoot the cattle and again for the use of a mechanical come-a-long to remove carcasses from the river. The same would be needed to allow construction.

Patterson said USFS notified the New Mexico Livestock Board, which is the entity that ultimately owns estray cattle by statute. That notice, though, was given on Thursday evening prior to aerial gunning operations scheduled the following Tuesday.

Just days after the settlement was reached, U.S. Sen. Martin Heinrich D-N.M., presented SB.2980 — an anti-grazing bill — to the Energy and Natural Resources Subcommittee Public Land, Forests, and Mining where the bill received a party line vote of 10 in favor and 10 opposed. According to a release from NMCGA, Chairman Joe Manchin, D-W.V., will notify the secretary of the senate of the tie vote, after which the senate majority leader may move to discharge the legislation so that, if agreed to, it can be placed on the Senate Executive Calendar. While the bill is not yet stopped, there will be an unknown period of anticipation while waiting for the floor leaders to convene. The bill is co-sponsored by Sen. Ben R. Lujan D-N.M.

Patterson said the legislation, poorly disguised with the same intent as President Biden’s 30×30 land grab, SB.2980 stands to target one of the poorest states in the nation by further eliminating viable jobs and generated funds to the county tax bases. The removal of land stewards and livestock grazing would be a detriment to New Mexico as grazing is a useful and necessary tool to the landscape, New Mexico’s No. 1 defense against wildfire. Under the scheme of SB.2980, NMCGA said, the management of land would fall under the jurisdiction of government agencies, who have consistently proven that they are not up to the task.

“Livestock is one of the largest economic generators in New Mexico. Particularly in our rural areas,” Patterson said. “It is unacceptable that we have two senators destined to hurt New Mexico’s rural communities and its people. This year alone, we have witnessed multiple reasons why this cannot pass.”