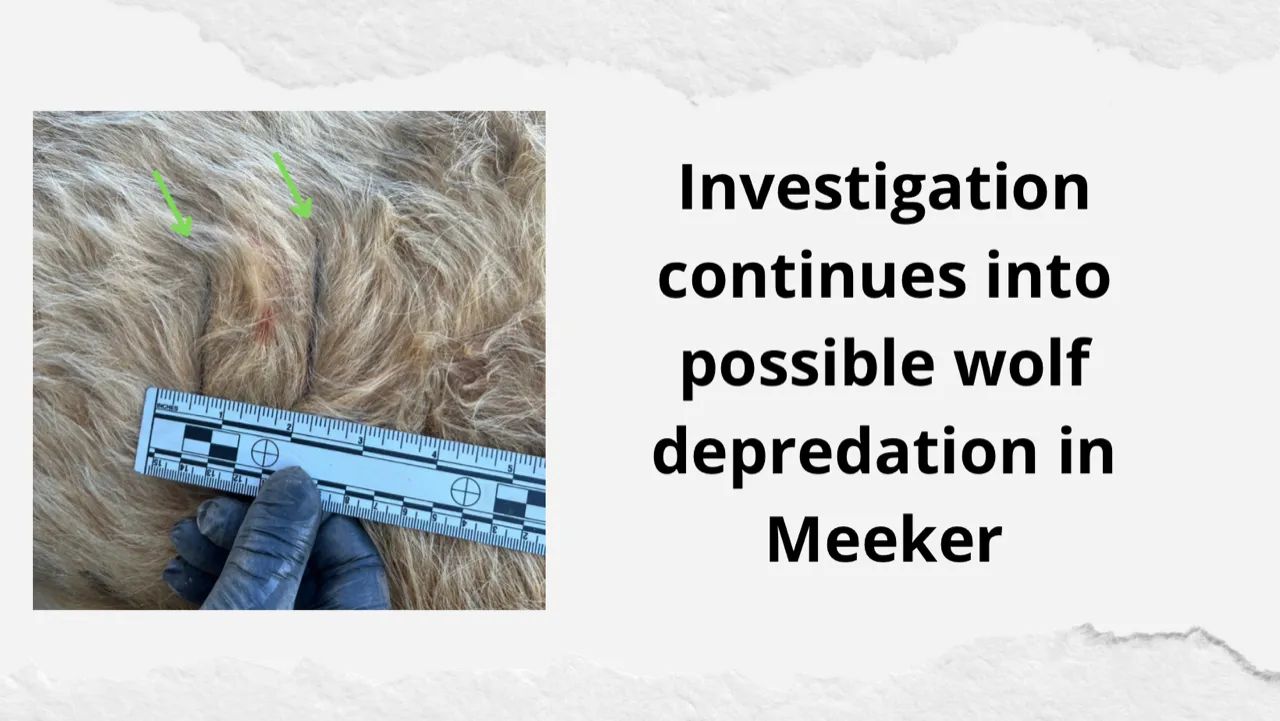 MEEKER, COLO., November 30, 2022 — In an update on the apparent wolf depredation and cattle losses found in Meeker on October 4, Lenny Klinglesmith said the ongoing investigation continues to move forward slowly with few answers. As reported by The Fence Post Magazine on October 7, 2022, Klinglesmith found 18 calves dead within 1.5 miles of one other.

The investigation performed with CPW and Wildlife Services pointed to wolf depredation, with several carcasses with tails missing and bearing marks consistent with canine teeth. The carcasses displayed hemorrhaging in locations where investigators are trained to look when distinguishing canine depredation from that of bear and lion.

“After a long day of necropsies, we spent time together trying to consider any other possible cause of death,” Klinglesmith said in a statement. “With several decades of experience managing livestock in the area and several decades of wildlife management by the DWM and Wildlife Services, we could not come up with another answer that was supported by the evidence.”

In the days following the discovery, he said they continued their annual gather back to ranch headquarters for fall shipping.

“Along the way, we started finding a dead calf every few miles,” he said. “At this point we brought in veterinary help with the investigation to look at any other possibilities. These investigations brought Clostridium Chauvoei (Black Leg) to our attention. As we researched this clostridial disease and outbreaks in other regions of the world with large casualties, some similarities to this situation were recognized.”

According to various white papers, Clostridium Chauvoei spores are harmless to the animal until wounds, trauma, or bruising damage the muscle tissue in such a way that an environment is created that is favorable for the spores to begin their vegetative growth. (Hart, SDV Cumberland) and the spores remain dormant until a poorly understood triggering event occurs, which may include local tissue hypoxia due to traumatic injury. (DeLay et al.) The organisms can survive for months to years without deleterious effects to the host. However, when the oxygen tension drops in areas of muscle in which spores are present, usually as a consequence of blunt trauma and associated tissue hemorrhage, degeneration, and necrosis, the spores germinate, proliferate, and produce toxins that are responsible for most clinical signs and lesions of black leg. (Abreu et al.)

Klinglesmith said the most likely scenario is that an apparent canine attack may have triggered the onset of a still-inconclusive cause of death. He said he made the management decision to change from administering a spring and a fall dose of 8-way vaccine, to giving two fall doses prior to weaning. The 8-way vaccine contains and protects against eight clostridial strains. This change in vaccine protocol allowed them to focus spring immune responses on the four main respiratory viruses, and Pasteurella. He said the goal in changing vaccine protocol was to administer fewer antibiotics throughout the summer months for respiratory sicknesses; and he said they were successful in this aspect.

“The good news is that, if in fact a clostridial was triggered by an attack, with a return to our original vaccine protocol we should be able to avoid the heavy casualties,” he said. “We should be able to limit our losses to a few depredation casualties, a possible reduction in weaning weights and breeding stock conception rates due to stress. This fits the research and experience consistently reported in the Northern Rockies.”

However, pathology results from samples sent to veterinary diagnostic labs did not show evidence confirming Clostridium Chauvoei as the cause of death. Results from Colorado State University said “there is significant autolysis in the skeletal muscle sections which makes interpretation difficult. However, there is no evidence of necrosis or active inflammation to suggest Black Leg.” (Colorado State University Diagnostic Laboratory, Oct. 20, 2022)

Samples sent to Texas A & M said “there are no microscopic lesions in the tissues examined that explain the cause of death in this animal. There is no evidence of inflammation, necrosis or degeneration.” (Texas A&M Veterinary Medical Diagnostic Laboratory, Oct. 21, 2022)

Klinglesmith said they continue to work closely with CPW, Wildlife Services, and veterinarians to verify the cause of death, and whether wolves are in the area. He said prior to October 2022 there were 8 officially reported wolf sightings in the area over the last few years. Since this case was reported, there have been many more reported wolf sightings, but none have yet been verified. There has also been a report of a pack of dogs, a lead that is being heavily investigated as well, but also, has not been verified.

“This whole process has taught us that these investigations will require a lot of time and effort on the part of CPW staff and landowners in rural Colorado,” he said. “We promise to continue to work with the local staff here in Rio Blanco County to figure out whether wolves are present or if there is another explanation for the apparent stress and trauma these calves suffered. As a multi-generational ranching family, we are committed to running a progressive livestock and wildlife operation. However, we are also committed to working with those in our state and keeping them updated on our scenario. Bridging the gap that exists between urban and rural is important to us. The future of livestock production in our state remains equally important.”

Klinglesmith said he understands that this is a highly contentious issue, but hopes stakeholders  can all agree on the fact that collaboration is key to working toward a solution. He said the relationship between state agencies, livestock associations, the Colorado public, and ranching families is crucial in moving forward with the process of coexisting with all wildlife on the landscape.