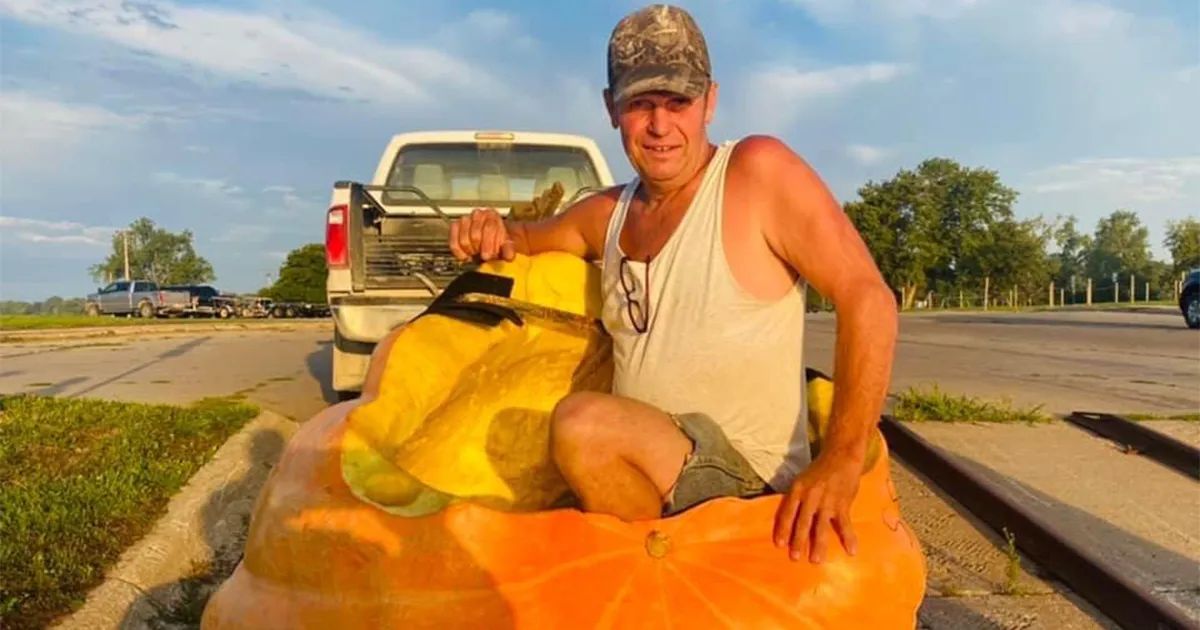 Raising a giant pumpkin doesn’t just happen by dumb luck or coincidence. Duane Hansen of Syracuse, Nebraska, knows this firsthand, having just grown one weighing in at 846 pounds.

“It’s an Atlantic Giant,” he said. “They’re special. You’re always looking for the perfect seed, the seed is one of the most important things.”

Hansen said of all of the factors that need to be perfect to grow a giant pumpkin, hand pollinating the female blooms is at the top. He uses rubber bands to tie the female blooms closed and heads to the patch at dawn to open the bloom and hand pollinate it to the correct male bloom before tying it closed once again to protect it from questionable paternity.

In his decade or so of growing pumpkins, Hansen attended a conference dedicated to the art of raising giant pumpkins. It was there he first heard about floating giant pumpkins down a river, and he found himself with a goal to do just that.

On August 27, he floated his single passenger pumpkin down the Missouri River, ending the voyage 38 miles downstream. Hansen broke the previous 2016 record by 10 miles with family, friends, community members and staffers from the Syracuse Mayor’s Office to witness the feat.

Hansen spends a tremendous amount of time in his garden, which is about a full acre just north of town. His wife, Allison, named the pumpkin Berta. He said one morning he made his way to the pumpkin patch and a handwritten sign was waiting for him that read, “Dear Duane, I need some alone time, dude. Love, Berta.”

The pumpkin portion of his garden can accommodate four pumpkins, each with room for 30 feet of vine in a triangle shape. The vines are all under shade cloth, important especially during a summer as hot as this one has been. Ideally, he said, the pumpkin will be growing about 15-feet from the main vine. Pruning is vitally important to concentrate energy and nutrients to a single pumpkin rather than either multiple pumpkins or tertiary vines. Some growers who battle powdery mildew utilize drip irrigation, but Hansen said he overhead waters. Some growers also incorporate misters on a timer to cool the pumpkins in the heat of the day. 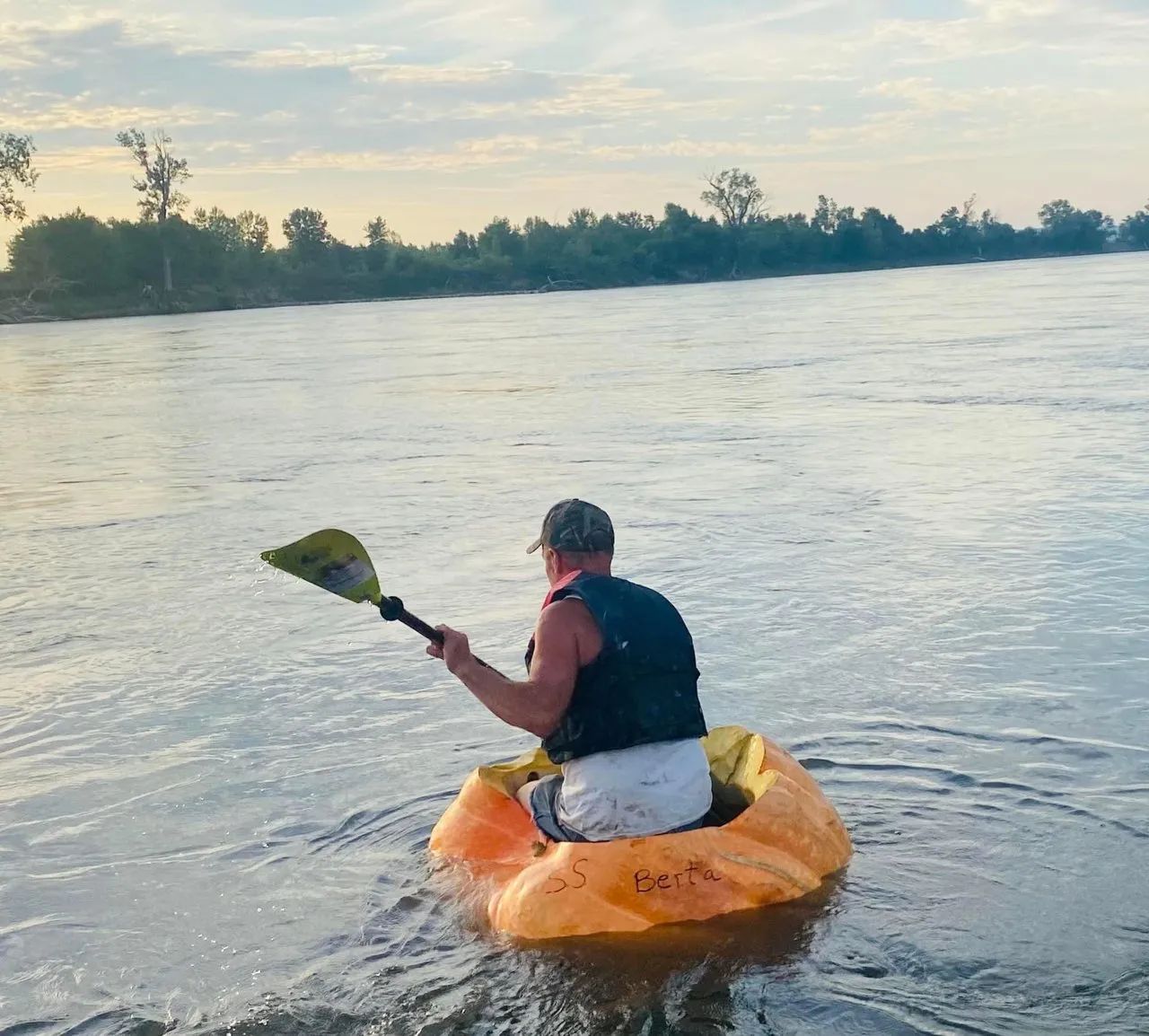 Genetically, he said, Berta had the genetics to grow to 2,100 pounds but to do that, conditions would have to be perfect. The stressful part, he said, is waiting to see the results.

“I don’t do everything perfectly,” he said. “I’ve got to try harder. You can never try hard enough.”

Soil tests and tissue tests are all commonplace among serious giant pumpkin growers. There is even a Utah lab that specializes in testing for giant pumpkins to ensure the ideal nutrients. In previous years, he has had 30-pound daily gains and has tried to push that to 40-pounds and seen the pumpkin stop growing entirely immediately.

When Berta was only 400-pounds, Hansen said he contacted the Guinness Book of World Records staff to inquire about the rules of floating down a river in a giant pumpkin, of which, he said, there is no shortage.

A pumpkin river vessel, he said, is tippy. Anticipating this, he lowered Berta into water to ensure he was cutting the top in the right location to avoid tipping it over in the water. Hansen built a custom sling that is used with his Bobcat to move the giant pumpkins. The stem, he said, is larger than the circumference of two aluminum cans. The sidewall, which he had to cut with a Sawzall, is about 12-inches thick. He saved about 100 Berta seeds.

He admits not all the advice in giant-pumpkin-growing groups on social media is good advice, but it is there he has been hit with good ideas and no shortage of inspiration. One group member in the U.S. has a pumpkin growing that is currently weighing in at 2,700 pounds.

He has plans to keep growing pumpkins even though this goal has been realized because he truly loves gardening, especially vining crops. He grows about 15 varieties of winter squash, gourds, onions, sweet potatoes, and other items to round out his annual fall display.

He recommends growing gourds- especially long gourds- on a cattle panel trellis to allow the vines to crawl up the panel and the gourds to hang down straight. Long gourd seed, he said, can be saved and will come back as they’re not hybrids. Birdhouse gourds also make an interesting trellis with a cattle panel bent in a U shape.

Gardening – especially growing giant pumpkins – is something he said must just be in his blood. He’s enthusiastic about the science and art of growing the giants, and equally enthusiastic about sharing the late summer and fall harvest, a record-breaker itself, with his neighbors.