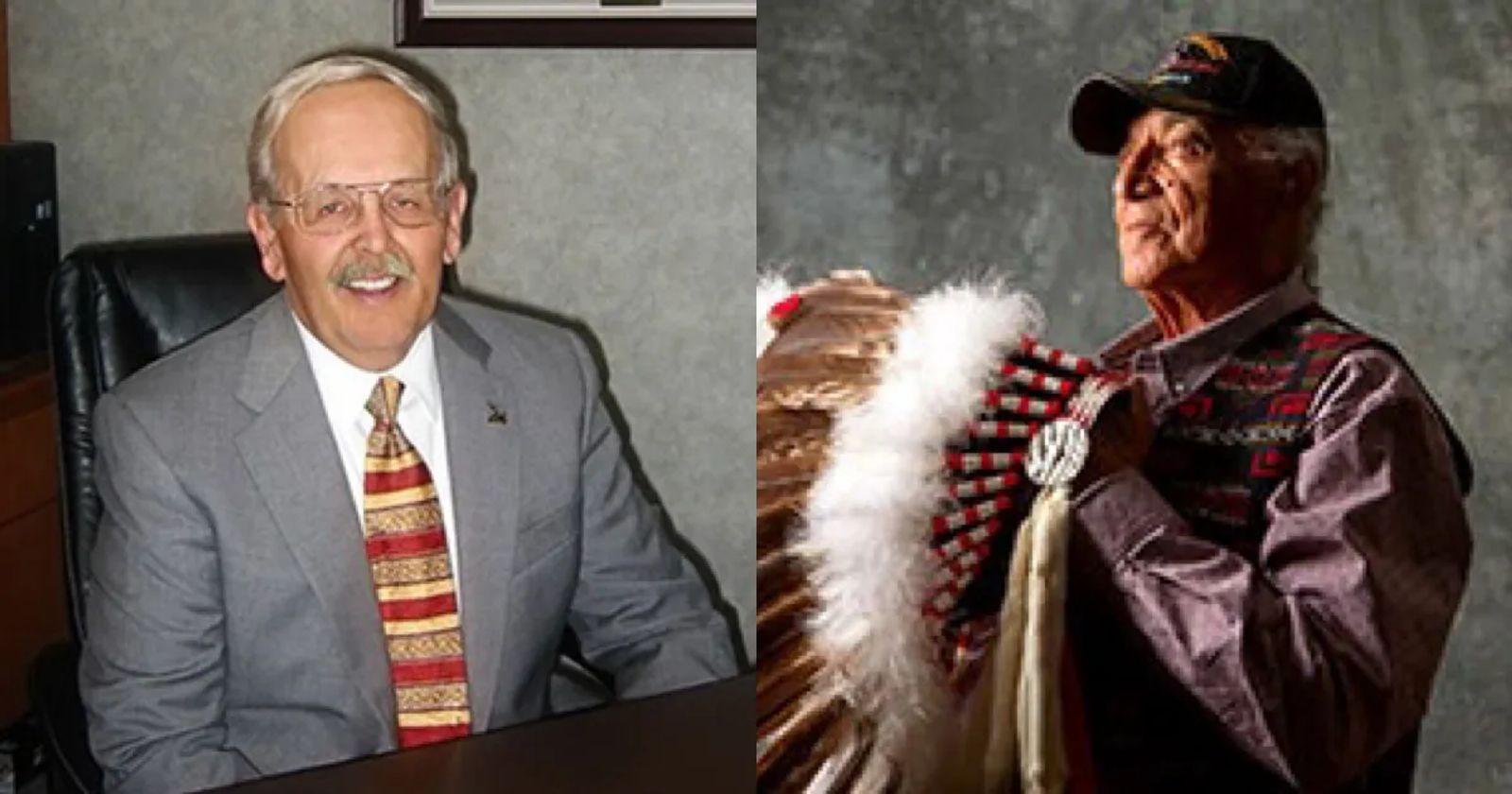 The University of Wyoming will confer its highest award, the honorary doctoral degree, upon two individuals who will be recognized during UW commencement ceremonies May 14-15.

They are Jim Magagna, the longtime executive vice president of the Wyoming Stock Growers Association and advocate for Wyoming ranchers; and recently deceased Northern Arapaho elder Crawford White Eagle Sr., who will be honored posthumously.

They each will receive the Doctor of Humane Letters degree.

UW alumni, current or former trustees and faculty members are eligible to nominate individuals for honorary degrees who embody the university’s high ideals; exemplify the values of excellence, service and integrity; and possess distinguished accomplishments in their professions, public service or service to humanity. Submissions are referred to a joint committee of trustees and faculty members, which forwards recommendations to the full Board of Trustees for approval.

Magagna has led the Wyoming Stock Growers Association since 1998. Before that, he served as director of the Wyoming Office of State Lands and Investments and Office of Federal Land Policy; during that time, he also chaired the Wyoming Oil and Gas Conservation Commission.

A native of Rock Springs, Magagna is a lifelong sheep rancher in southwest Wyoming. Among other offices, he has served as president of the American Sheep Industry Association and president of the National Public Lands Council. He has represented the agriculture industry on numerous national, state and local councils and advisory boards.

A graduate of Rock Springs High School, Magagna holds a bachelor’s degree from the University of Notre Dame and a law degree from Stanford Law School.

“Jim’s background, life and career have influenced ranching, open space conservation, and state and federal policies that impact Wyoming and the Rocky Mountain West,” wrote UW College of Agriculture and Natural Resources Dean Barbara Rasco. “He has dedicated his life to helping maintain Wyoming’s open spaces, preserve the Wyoming way of life, and advocate for many of the people and industries that call Wyoming home.”

“Jim is a skilled attorney, effective communicator, trusted advisor and friend to all,” wrote U.S. Sen. John Barrasso, R-Wyo. “This combination has made him a crucial part of state and national policy over the course of his career … His contributions to Wyoming, the Rocky Mountain West and the United States are unquestionable.”

“Jim has been a true leader for the ranching industry as executive vice president of the Wyoming Stock Growers Association for the past 23 years,” wrote rancher Scott Sims, president of the association. “He is well respected and sought after for his guidance and opinion on what is best for the livestock industry and the state of Wyoming as a whole.”

He was involved in many creative and collaborative efforts, serving as a language preservation consultant for the National Indian Education Association; leading a delegation involved in artifact identification at Yale University; and helping create the Wind River Education Project and the American Indian Education for All curriculum, among many other projects.

White Eagle served his country in the U.S. Army during the Vietnam War and was twice wounded in combat, receiving the Purple Heart and many other medals. A graduate of St. Stephens High School, he was a master jewelry maker and silversmith.

“In keeping with his family ancestral legacy, Crawford White Eagle focused his life’s work on Arapaho cultural survival. … He harnessed ceremonial knowledge, traditional leadership, service and diplomacy to achieve his goals,” wrote James Trosper, director of UW’s High Plains American Indian Research Institute, and Greg Nickerson, Wyoming Migration Initiative writer and filmmaker. “Many of the good things occurring on the Wind River Indian Reservation and in Fremont County -- and between the Northern Arapaho and state of Wyoming -- can be traced back to (his) participation or guidance.”

“Mr. White Eagle focuses his life on serving his community and engages in this important work because he knows that his efforts will lead to a stronger future for all citizens of the state of Wyoming,” wrote Lee Spoonhunter, co-chairman of the Northern Arapaho Business Council. “At a time when we cannot have enough people who work to bring everyone together, Mr. White Eagle stands out as someone who constantly strives to build bridges -- not for selfish reasons, but for the betterment of everyone.”