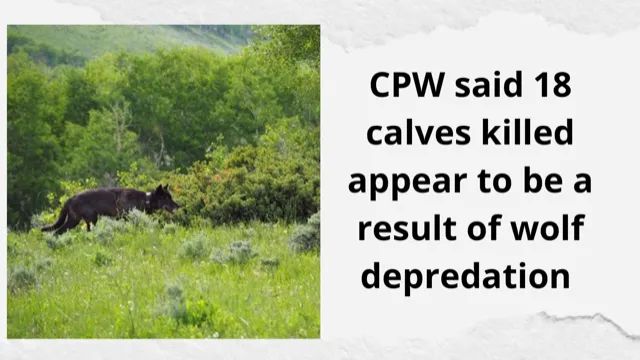 MEEKER, CO, October 7, 2022 — Lenny Klinglesmith, a Meeker, Colo., rancher, has been preparing to coexist with wolves in Colorado. He is a member of the Stakeholders Advisory Group that was convened by Colorado Parks and Wildlife to provide a range of viewpoints from diverse geographic areas of the state and propose considerations for the plans developed by the Technical Working Group. The groups’ planning meetings have concluded, and the two groups are preparing to deliver their final reports to the Colorado Parks and Wildlife Commission prior to wolves being released in Colorado.

It was on the LK Ranch near Meeker that he and his wife, Jackie, own and operate, where 18 head of 600-pound calves were found dead on Oct. 5 from an apparent wolf attack. The cattle, all found within a mile and a half of one another, all suffered extensive trauma and damage to their flanks, bite marks on their heads and faces, some missing and damaged tails, and extensive bruising on both sides.

Klinglesmith said the local staff of CPW responded and began an investigation and completed necropsies on every animal. The local division manager, he said, recently completed training with officials in Cody, Wyo., to identify and determine wolf depredations. Another CPW division manager responded, he said, in addition to officials from Wildlife Services.

“All 18 had trauma indicative of a wolf pack killing,” he said. “Nothing fit the MO of a bear or a lion or larkspur.”

He said the initial investigation points to wolf depredation. CPW did confirm in a press release this is an open investigation and said the damage is consistent with wolf attacks.

The calves were among about 600 pairs on a large forest grazing allotment the family has grazed for decades. When the cattle were killed, Klinglesmith was in Montana with Colorado State University staff to tour the Blackfoot Challenge and the Madison Valley Ranch Group, cooperative groups of ranchers who have banded together to learn to coexist with predators. The trip was designed to teach Colorado producers how to cooperate with neighbors and other actions to prepare for wolves, including carcass management and the formation of phone trees to communicate the presence of wolves and to coordinate proactive measures like increased range riding. Rainy conditions kept the family out of the area for only a few days before they were able to access the cattle.

“We’re trying to learn how to coexist with wolves like we’re going to need to, but I was preparing to share a calf or two here and there to feed their pack, be compensated, and do what I can to prevent conflict,” he said. “When they come through and slaughter 18 calves and leave them lie, they’re not holding up their end of the deal with coexistence.”

Klinglesmith believes in impact-based management and continued to do so while CPW staff was investigating and completing necropsies on his calves. He also photographed the carcasses, but said he is awaiting CPW’s release of their photos rather than sharing his own.

“What is the commission, the agency, and frankly, the administration going to do to support ag producers that get hit in this way?” he said. “This is something that is hard to coexist with.”

Klinglesmith said the losses won’t be fully revealed until they complete their fall gather and wean the remaining calves and can determine whether they located all of the carcasses or if there are more that weren’t discovered in the brush-covered allotment.

He has been working shoulder to shoulder with Colorado Parks and Wildlife since 2007 to conserve land for wildlife and agriculture. He believes wildlife and ranching can coexist and that was top of mind when he took his seat on the CPW Stakeholder’s Advisory Committee. He said he has enjoyed a long relationship with the local CPW staff and said they are exceptional to work with.

In the language of Proposition 114, the voter-approved measure that prompted the release of wolves in the state, dictates that any losses of livestock caused by wolves must be paid fair compensation and the restoration of wolves to the state must be designed to resolve conflicts with persons engaged in ranching and farming in the state.

In his work with the SAG, Klinglesmith made the recommendation that ranchers experiencing losses due to wolves be afforded the opportunity to choose to either be paid using a multiplier or be paid based upon three years of average data to determine a baseline of loss. Producers would then be paid on the difference between the baseline and the current year’s loss, which provides incentive for ranchers to maintain accurate records and accounts for lower conception rates and lower weaning weights. He said there was broad support for the payments on average losses among the SAG. This depredation, he said, illustrates the need for a compensation plan for ranchers, something that was in the text of Proposition 114 and approved by voters.

It is the will of the people, he said, to have wolves in the state but it’s also the will of the people to compensate for all losses to ranchers and farmers as a result of the voter-approved measure, not just the carcasses that are found and ruled wolf kills. Lower conception rates and lower weaning weights are also due to the presence of the predators.

The behavior of the remaining cattle, he said, is indicative of wolf presence and attacks. The herd was located in an area they typically don’t frequent and appeared to be pushed over a ridge. He said the remaining cattle are nervous and averse to the ranch’s working dogs. The ranch has long utilized working border collies and he said the cows know to move from dog pressure, making him think the cows moved from the wolves, leaving the calves with little protection.

Thus far, prior to any wolves being released in the state as a part of Proposition 114, he said the impact has been tremendous to the ranching community.

The Klinglesmiths operate their ranch focusing on sustainably raising their commercial cowherd in addition to a grass-fed yearling stocker program. They were awarded the Landowner of the Year award by CPW in 2012 and have cooperated with CPW to put conservation easements on portions of their ranch. Klinglesmith also works with Colorado Cattleman’s Ag Land Trust, Habitat Partnership Program, and has lent his expertise to CPW’s Ranching for Wildlife program, a big-game hunting program that provides private client, public drawing, and youth hunting opportunities. He was also appointed in 2012 to serve as the landowner/cattleman representative on CPW’s local White River Habitat Partnership Program Committee, a group that works to foster relationships with local landowners to improve wildlife habitats and resolve big game conflicts.