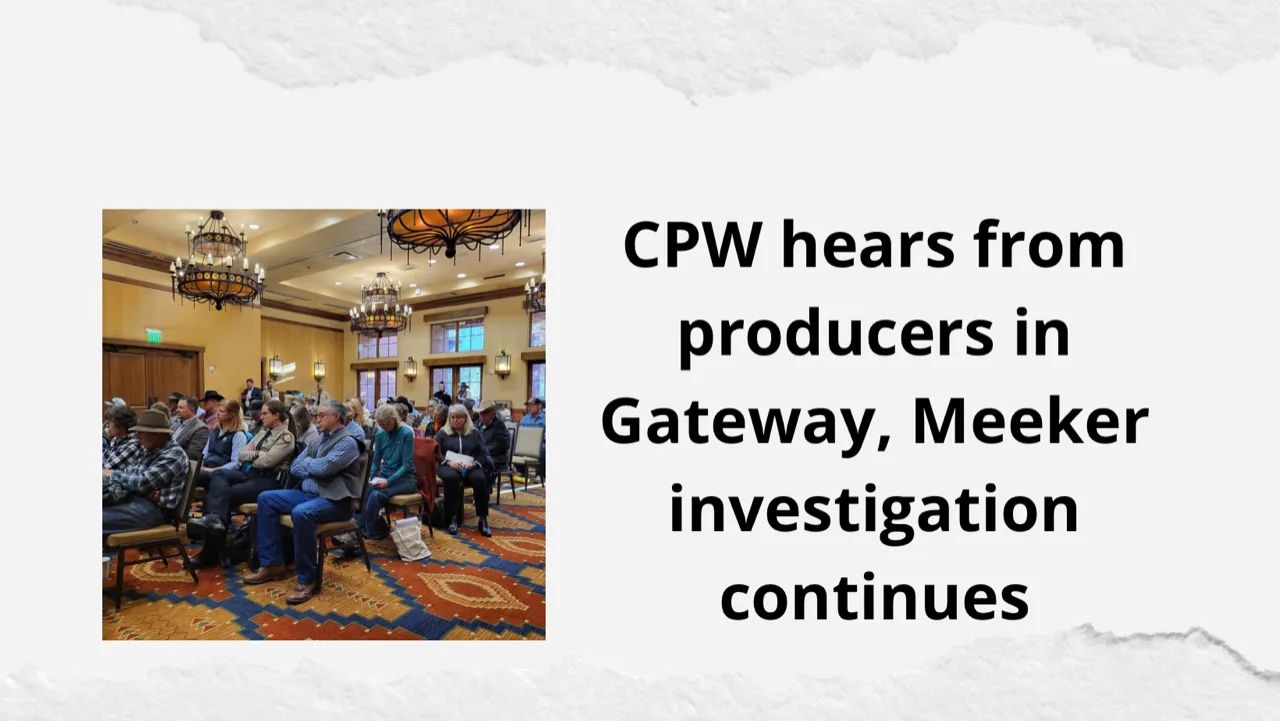 GATEWAY, CO., November 22, 2022 — The Colorado Parks and Wildlife’s Stakeholder Advisory Group’s Final Summary Report is now available to the public and over 80 people gathered in Gateway, Colo., to offer comments to the CPW commission with regard to planned wolf introduction.

The SAG was convened to seek consensus among wolf advocates, ranchers, hunters, outfitters and conservationists who were tasked to explore the social, economic, and scientific aspects of wolf reintroduction and management in an effort to benefit both wildlife and people. In a letter introducing the final report, members said “this charge may have seemed impossible in a world of often polarized opinions.”

According to the letter, the SAG fostered civil discussion and understanding across differences, often resulting in strong convergence even on the most contentious issues. There was disagreement, they said, as will be the case with the public.

“However, for Colorado’s wolf program to be successful, there is a need to realize that there are real people affected by any decisions and recognize people have more in common than apart. Everything will have unintended consequences that need to be considered and can be lessened by having early conversations that lead to effective actions. Room needs to be made for individual perspectives and locally based solutions that help resolve challenges and reduce divisions.”

The commission heard an update about possible wolf depredation near Meeker from Regional Manager Travis Black, who called the incident perplexing. The initial number of calves found dead in October was 18 and is now up to 40. Howling surveys, aerial spotting and game cameras have not offered any signs of wolves and a hair and scat sample were tested and inconclusive. He said veterinarians called to the ranch suspect a possible clostridial bacterial disease exacerbated by harassment by wolves. There are about five carcasses that showed marks consistent with wolf depredation and the investigation is ongoing.

“We’re scratching our heads a little bit and we don’t know exactly what has occurred up there,” he said. “The possibilities are that wolves maybe drifted through, spooked that livestock, potentially injured that livestock, and some sort of health component was exacerbated by that, and cattle continue to die over time. It could have been a myriad of things.”

He said the livestock producer, Lenny Klinglesmith, continues to work with CPW and others as well as veterinarians to investigate and determine the cause of the deaths. Commissioner Marie Haskett pointed out that previous investigations of wolf depredations have continued for about two months before officials were able to secure solid evidence of wolves in the area.

During the public comment portion rancher Janie Van Winkle spoke on behalf of Colorado Cattlemen’s Association and encouraged the commission to support a strong trust relationship between the CPW and landowners. Bonnie Brown, executive director of the Colorado Woolgrowers Association, said livestock can suffer catastrophic illness as a result of predator pressure and offered the example of 145 head of sheep chased off a cliff in Idaho and 178 head of sheep in Wyoming, all without leaving bite marks. Rancher Mia Anstine urged the approval of lethal means of control of wolves and a number of comments urged the commission not to introduce wolves without a 10(j) rule in place. Other commenters asked the commission to consider the SAG recommendations to cultivate trust between the CPW and the residents shouldering the negative impacts of wolves in the state. The commission will be presented with the draft plan for public engagement on Dec. 9 in a public meeting, and five hearings will follow in January and February. The final draft plan will be presented to the commission in April and the commission will vote on the final plan and regulations on May 3 and 4.

The Holy Cross Cattlemen’s Association hosted a meeting last week that included a panel to discuss wolf introduction. SAG member Renee Deal spoke to producers prior to the panel discussion. Phillip Anderson, president, CCA, said the meeting was a good example of producers coming together to ensure all of the bases and gaps are covered when speaking before the CPW Commission. Anderson reminded attendees that NGOs, non-governmental organizations, advocating and supporting wolf introduction have “pockets as deep as your tall cowboy boots” so it is important ranchers stand behind and support groups advocating for small communities, ranchers, and outfitters affected by wolves.