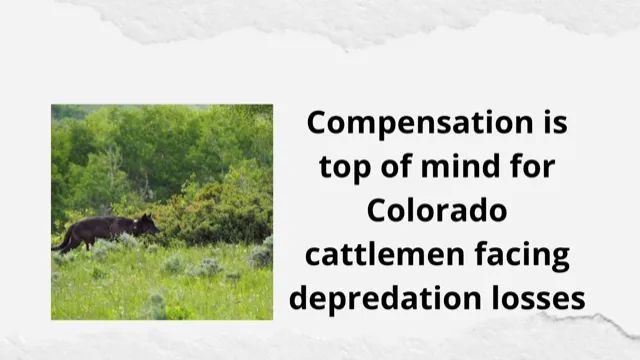 Sharing the Burden: Compensation in Colorado

MEEKER, CO, October 17, 2022 — The language in Prop 114, the voter-approved measure to bring wolves to the state promises the “restoration of the gray wolf to the state must be designed to resolve conflicts with persons engaged in ranching” and producers must be paid “fair compensation to owners of livestock for any losses of livestock caused by gray wolves, as verified.”

Lenny Klinglesmith is still awaiting the results of Colorado Parks and Wildlife’s ongoing investigation to determine whether the 18 head of calves — now up to 22 — found dead on Oct. 5 were killed by wolves. CPW did confirm the investigation in a press release and said the damage is consistent with that of a wolf attack. There have been 22 calves identified so far and the depredations are believed to have occurred over an approximately two-week timespan and over a geographic area spanning a few miles. This is, according to a spokesman, an active investigation and CPW is still determining the total number of livestock that were killed.

Klinglesmith, in his role on the Stakeholders Advisory Group (SAG), has kept the question of compensation front and center. His recent losses, he said, reinforced his dedication to the need for a fair compensation program.

In Montana, the Livestock Loss Board was created by statute in 2007 to address economic losses as a result of wolf predation and to create incentives for producers to take proactive measures to mitigate the risk of loss. A state agency, the board is funded by general fund tax dollars and provides financial reimbursements to producers for losses caused by wolves, grizzly bears or mountain lions based on program criteria.

For Livestock Loss Board executive director George Edwards, the shortcomings and successes of compensation programs are easily identified. Lack of funding is one of the major challenges in Montana. At its inception, he said there were a number of pro-wolf organizations that indicated they would make available funds to compensate livestock owners for depredation caused by the predators. The law created the ability for the state to collect up to $5 million from these groups and allow the board to utilize the interest to pay compensations to ranchers.

“To date, not a dime has ever been put in by the people who love wolves,” he said. “That trust fund remains empty.”

Similar to Wyoming, Montana has the option to pay compensations on a multiplier. In this model, livestock damage must be investigated and confirmed by officials and is then paid on a multiplier for 3.5 the number of animals confirmed, not to exceed the number of livestock present. According to an article titled Compensation Programs in Wyoming for Livestock Depredation by Large Carnivores by M. T. Bruscino and T. L. Cleveland, both the Wyoming Game and Fish Department in the Sheep and Goat Research Journal from 2004, most damage reimbursement programs pay for the value of the livestock at the time of death and not for indirect costs associated with depredations, so managing the conflicts in addition to compensating for losses is often the desired action for both the agencies and the producer.

Currently, he said Wyoming pays claims only in a small area bordering Yellowstone Park and not statewide. Wolves in most areas of Wyoming are considered a predator, just as a coyote is, and they can be shot on sight by anyone at any time. However, he said spotting wolves and catching them in the act of attacking livestock is very difficult and trapping remains the most successful means.

Yearly claim payments vary greatly, though wolves typically account for about $80,000 in payments. Grizzly bears currently account for the largest losses and ranchers have little recourse and there are strict restrictions on hazing methods.

“When we had that added to us in 2013, that was really a spiral out of control,” he said. “Just like wolves are an endangered species in Colorado, not being able to address the problems when they occur becomes a really big issue. Ranchers can shoot a wolf in Montana.”

Initially, he said, wolf depredation claims skyrocketed in Montana until a hunting and trapping season was established, and then claims stabilized and held consistent for over a decade.

“That is the only thing that has kept it in check here is the hunting and trapping season,” he said. “Without that ability in Colorado, I can see a real wreck coming for the ranchers in the future.”

Edwards said one of the successes of the Montana program is leaving the investigations of claims to the USDA Wildlife Services.

“They have no skin in the game to say a wolf killed a calf or not,” he said. “They’re a neutral third party, opposed to game and fish officials who are tasked with protecting those animals. They can be viewed as being overly protective and erring on the side of the wolf rather than the rancher. Having that neutral third party is one of the things that makes it work here.”

Last week, the Montana Livestock Loss Board paid a claim for 37 adult rams killed by wolves in the southwest part of the state. Similar to the depredation being investigated in Meeker, Colo., the most recent ram depredation was a surplus kill, with carcasses left uneaten. Edwards said the same ranch lost 128 rams to wolves over two days in 2009. That year, he said the ranch had 140 total rams and the depredation left the ranch scrambling to find rams to turn out with the ewes for a timely lambing season. Edwards said the Montana program has a fast turnaround for payments, which helps ranches stay in business when predators cause losses at particularly inopportune times.

In Washington and Oregon, Edwards said producers filing claims for compensation must first prove they used loss prevention measures. He said this is not working for ranchers in part because ranchers are oftentimes unaware wolves are in the area until death losses occur. Turbo fladry, temporary electric fencing with flags, for example, is expensive and he said it is only efficient for a small window of time, sometimes as little as a day. Edwards said penalizing ranchers for not utilizing loss prevention measures to deter predators that may or may not be in the area doesn’t work.

Range riders are widely used and are helpful for early detection of wolf presence in an area. He said some organizations employ the same range riders year after year who are familiar with livestock and the area, making them more beneficial. Just as is the case with some Colorado sheep ranches, Peruvian herders are widely used in Montana and are effective.

“People who know those animals and are familiar with them do well,” he said. “It was touted that it would be a boon for tourism and people would come camp on the property and be range riders for a couple of weeks for their vacations. It’s a wreck. It doesn’t work and the ranchers don’t want those people out there disrupting their cattle.”

Guardian dogs, he said, have to have the right temperament to be effective against wolves, but can’t be overly aggressive, especially on public lands that are multi-use. He said once attacked, dogs will no longer protect the herd. Guardian dogs also carry a great deal of expense, especially in dog food and veterinary expenses.

“I feel very sympathetic toward the ranchers in Colorado because of how that was pushed in and that’s the nature of the beast,” he said. “Getting an adequately funded compensation program and one that is independent of the game and fish agency is one of the most important things, so the fox isn’t guarding the hen house. Even if they’re as honest as can be, the perception is there and very harmful.”