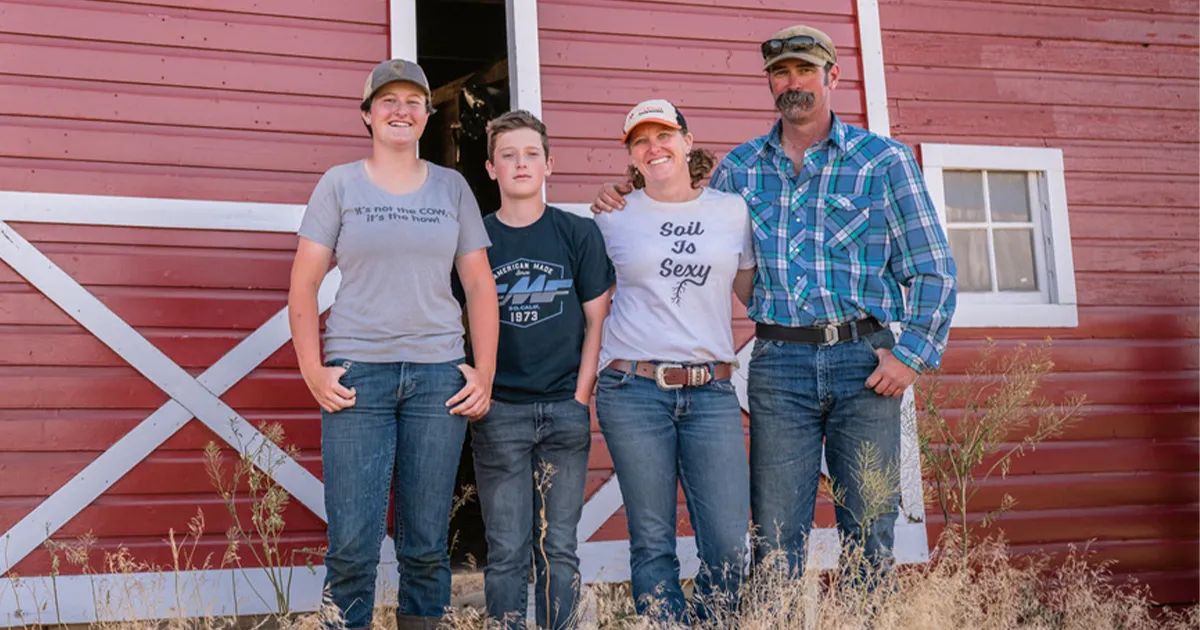 Barney Creek Livestock of Livingston in Park County is the 2022 recipient of the Montana Leopold Conservation Award®.

Given in honor of renowned conservationist Aldo Leopold, the prestigious award recognizes farmers, ranchers and forestland owners who inspire others with their dedication to land, water and wildlife habitat management on private, working land.

Sand County Foundation and American Farmland Trust present the award in Montana with the Montana Department of Natural Resources and Conservation, and the Rangeland Resources Committee.

As owners of Barney Creek Livestock, Pete and Meagan Lannan are cattle ranchers and land managers who are showing others how conservation practices can heal landscapes. The Lannans receive $10,000 and a crystal award for being selected.

“For generations, Montana’s farmers and ranchers have been dedicated stewards of our land and water resources,” said Governor Greg Gianforte. “Through the Leopold Conservation Award, we recognize the farmer, rancher, or forested landowner who has set the standard as a caretaker of our working landscapes.”

“These award recipients are examples of how Aldo Leopold’s land ethic is alive and well today. Their dedication to conservation shows how individuals can improve the health of the land while producing food and fiber,” said Kevin McAleese, Sand County Foundation President and CEO.

“As the national sponsor for Sand County Foundation’s Leopold Conservation Award, American Farmland Trust celebrates the hard work and dedication of the Montana recipient,” said John Piotti, AFT President and CEO. “At AFT we believe that conservation in agriculture requires a focus on the land, the practices and the people and this award recognizes the integral role of all three.”

Earlier this year, Montana landowners were encouraged to apply (or be nominated) for the award. Applications were reviewed by an independent panel of agricultural and conservation leaders.

Among the many outstanding Montana landowners nominated for the award were finalists Goggins Ranch of Ennis in Madison County, and Kurt and PJ Myllymaki of Stanford in Judith Basin County. Last year’s recipient was Hidden Hollow Hideaway Cattle and Guest Ranch, owned by the Flynn family of Townsend in Broadwater County.

In his influential 1949 book, A Sand County Almanac, Leopold called for an ethical relationship between people and the land they own and manage, which he called “an evolutionary possibility and an ecological necessity.”

Sand County Foundation and American Farmland Trust present the Leopold Conservation Award to private landowners in 24 states with a variety of conservation, agricultural and forestry organizations. For more information on the award, visit www.leopoldconservationaward.org.

Pete and Meagan Lannan are innovative ranchers who found a way to raise beef cattle amid exorbitant land values in Montana’s Paradise Valley. As owners of Barney Creek Livestock, they became land managers who show others how conservation can heal landscapes.

Pete studied the environmental and economic benefits of rotational grazing when his parents, Larry and Cathy Lannan, offered to lease Jordan Ranch to him. Pete and his wife Meagan were passionate about making improvements to the soil at the 200-acre ranch that has been in his family since 1900. They embraced conservation practices to build its resiliency for future generations, including their children, Maloi and Liam.

The USDA Natural Resources Conservation Service’s Environmental Quality Incentives Program helped with that conversion. With its financial and technical assistance, the Lannans mapped out grazing plans and upgraded their fencing and water infrastructure. Water and energy efficiencies were gained when a flood irrigation system was replaced with a pipeline delivering water to livestock tanks and a sprinkler irrigation system.

Their cattle and grass both thrived with a rotational grazing system, allowing the Lannans to increase stocking densities on their pastures. Pete and Meagan realized the more grass they could grow, the less hay they would need to harvest or buy. Since grazing year-round and stopping hay production in 2016, they only purchase the hay needed to feed during harsh winter storms. This change has saved them $120,000 in equipment depreciation, in addition to lower fuel and labor costs.

Barney Creek bisects their family’s ranch. Its riparian area was fenced off to only allow short-duration grazing, which promotes sapling growth and improved riparian function. Windbreaks were established to protect cattle and provide habitat for deer and elk. Wildlife-friendly fencing was installed on the ranch’s perimeter.

Each conservation success at the ranch inspired the Lannans to do more. They saw their cattle as a tool to help other landowners in Paradise Valley achieve soil health. They built relationships with owners of ungrazed and degraded properties by explaining how their stewardship could conserve and enhance natural resources.

Landowners have noted an influx of birds in pastures grazed by Barney Creek Livestock, lending credence to the adage that “what’s good for the herd is good for the bird.”

The Lannans lease more than 800 acres from five landowners; but it’s about more than grazing their cattle. Their lessors learn about the photosynthesis process, carbon sequestration, the benefits of hoof action on the land, and that livestock are nutrient cycling machines. They are coached on how soil amendments enhance soil microbiology, and they receive results from annual soil and plant tissue tests.

Early on, the Lannans recognized that raising cattle is about much more than just marketing beef. The path to success led them off of their home ranch in more ways than one. They frequently move their cattle to greener pastures in Paradise Valley, and they are members of a variety of peer, consumer, neighbor, and apprenticeship networks.

Of all their notable successes on the land, their greatest conservation achievement might be their willingness to share their land ethic with others.