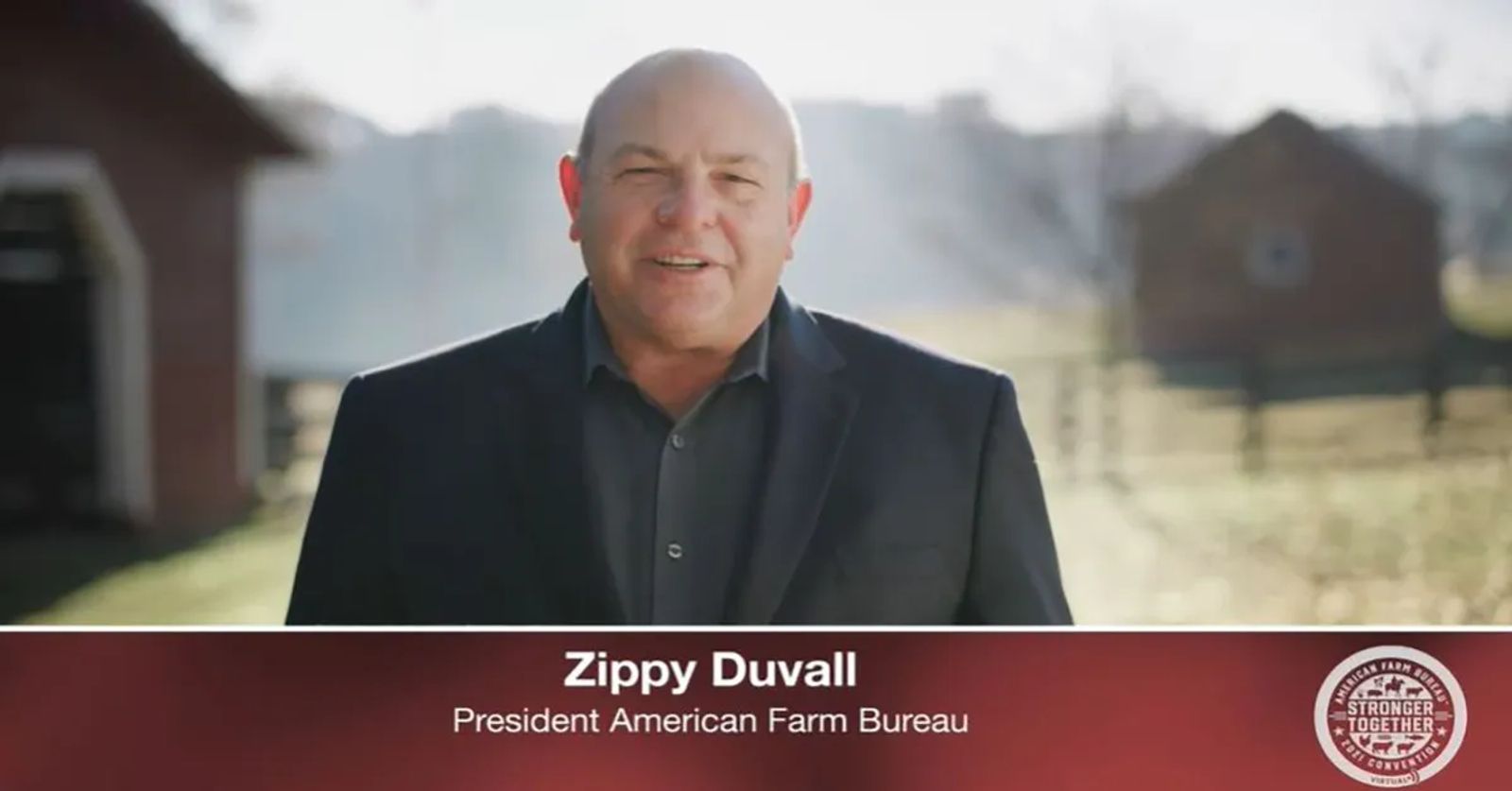 The American Farm Bureau’s Virtual Convention kicked off Sunday with an opening address by AFBF President Zippy Duvall from his farm in Georgia.

“When we started planning this year’s convention in February, we chose the theme: Stronger Together,” Duvall said. “Little did we know how appropriate it would be. The past year has shown us just how true that theme is.

“Clearly, 2020 was a year of challenges,” Duvall continued. “Farmers and ranchers faced high expectations to keep America – and much of the world – fed during a global pandemic.”

Farmers and ranchers rose to meet those expectations, Duvall noted.

“We also took steps to keep our employees and families safe, while still working to grow the food our nation depends on. We managed unprecedented changes in food demand and wild swings in farm prices,” he said.

Duvall touched briefly on wins for agriculture in 2020 in his remarks, including relationships built with Congress and the administration that helped deliver $38 billion to help the nation’s farms survive and continue producing the nation’s food supply; replacement of the Waters of the U.S. rule with a new Navigable Waters Protection Rule that complies with the law; tax reforms enacted in 2017 that have helped farmers keep more of what they work so hard to earn, so they can reinvest in their farms and ranches; and new trade agreements that promise brighter days ahead for exports of farm goods.

Also on Sunday, Duvall announced the launch of AFBF’s new effort to address food insecurity while celebrating America’s farmers and ranchers’ commitment to keeping the U.S. food supply strong. The #StillFarming campaign, which began on social media and has reached nearly 100 million people across the digital landscape, is now expanding to include a merchandise line that will benefit food banks and agricultural education.

The hashtag has been so wildly popular that AFBF is offering #StillFarming T-shirts for sale. Profits will go to Feeding America, the nation’s largest network of food banks, and the American Farm Bureau Foundation for Agriculture, which is committed to building awareness and a positive public perception of agriculture through education. The T-shirts are being sold through AFBF’s online store (https://www.dmsfulfillment.com/FarmBureau/) and will be available through June.

Duvall praised the generosity of Farm Bureau members for making things better for those who need a helping hand during the pandemic.

“I’m especially proud of state Farm Bureau efforts to ‘give back’ to their communities, by connecting farmers to organizations helping people in need,” Duvall said. “In fact, the Farm Bureau Family has donated more than $5 million and more than 1 million pounds of food to food banks and non-profit organizations across the country.”

Also on Sunday, Sherry Saylor, chair of the AFB Women’s Leadership Committee, announced that in 2020 the Farm Bureau Family raised $217,000 for Ronald McDonald House Charities and its network of local Chapters, more than double the goal amount.

“Combined with the money raised last year, this totals over $450,000 in donations since the beginning of 2019,” Saylor said.

The final four teams in the Farm Bureau Ag Innovation Challenge were also announced. They are:

They will compete in the final round of the competition on Tuesday, Jan. 12, to win Entrepreneur of the Year and a total of $50,000.

Monday through Wednesday (Jan. 11-13), attendees will have the opportunity to hear from industry leaders, farmers and policy experts at both live featured workshops and on-demand sessions.

Monday’s live programming will feature a discussion with AFBF President Zippy Duvall and Land O’ Lakes President and CEO Beth Ford exploring the challenges and opportunities for agriculture and the food chain in 2021, at 3:00 p.m. ET. The day’s events will wrap with a special Foundation Night In at 5:00 p.m. ET, featuring performances by Sara Evans and Phil Vassar, and the unveiling of the Foundation Book of the Year and the 2021 Farm Dog of the Year.

Tuesday’s general session at 6:00 p.m. ET will feature an engaging and inspiring keynote address from Navy SEAL Commander Rorke Denver, who has run every phase of training for the U.S. Navy SEALs and led special-forces missions in the Middle East, Africa and Latin America.

Wednesday’s highlights include the Young Farmers & Ranchers Discussion Meet Final Four at 11 a.m. ET. At 12:30 p.m. ET, Mike Rowe will join the AFB Virtual Convention for a fireside chat. As the country’s leading advocate for skilled labor and the CEO of the mikeroweWORKS Foundation, Rowe seeks to debunk myths and misperceptions about blue-collar jobs.

The AFB Virtual Convention is free to all, and registration remains open throughout the event, which runs through Jan. 13.