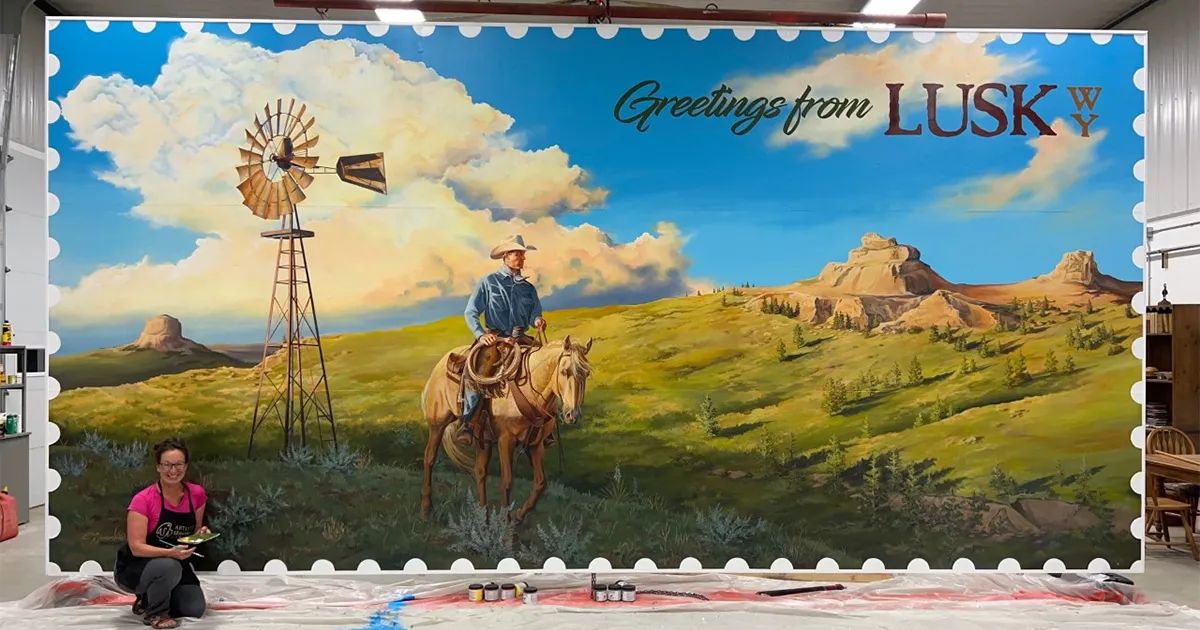 Lisa Norman experienced her life as a ranch wife through her lens as a professionally trained artist. She and her late husband, Denley Norman, worked on ranches in Texas, Nebraska, South Dakota, and finally in her native Wyoming. Their travels included legendary names like Buster Welch, and places like the Padlock Ranch and Haythorn Land and Cattle Company. The Pfister Ranch, now the Four Three Ranch, about 40 miles north of Lusk, was also home to Lisa and her family. It was there, in part, she fell in love with the sage brush landscape sweeping up to the Hat

Creek Breaks in Niobrara County. Norman documented ranch life with her feet firmly planted in its midst and, she said, her faith guiding her hand.Linda Cummings, a former neighbor of Norman’s when they both lived on ranches north of Lusk, said they were once loading yearlings at a neighboring ranch and Norman wanted a photo. She said Norman climbed to the top of the cattle pot to get just the right shot while the crew pushed clambering grass cattle up the ramp and into the trailer. Cummings said, in the fashion true to the cowboy culture, Norman taught herself to paint also with her left hand, so if her dominant hand were ever injured, she could still support herself and her daughters. She said several years ago, she submitted pieces to the Art of the Horse Show at the American Quarter Horse Association Museum in Amarillo, Texas. One was painted with her left, the other her right and they both were displayed, a personal challenge realized.

Before returning to Wyoming, the couple spent 15 years on the Haythorn Ranch in Nebraska. The scenes that played out before her daily, while part of the daily workings of the ranch, were also rich with history and beauty. Moving from the Bighorn Mountains of Wyoming to the Sandhills of Nebraska, she said she spent far too much time lost and riding circles in the sand with no recognizable landmarks to guide the way. She said she often wondered what the first Haythorn woman must have thought when “they crossed the 500th sandhill and was told, ‘we’re home.’”

As she learned to appreciate the geography, she also documented the seasons on the ranch. It took her two years, she said, but she compiled a coffee table book entitled Haythorn Land & Cattle Co.: A Horseman’s Heritage, A Pictorial Essay, that brought the seasons on the Haythorn to the pages. The ranch, she said, was 70 miles from town and the crew used horses to hay, feed, and the wagons still went out each summer, taking the remuda with them.

“It was quite idyllic,” she said. “We had no idea I was documenting the end of an era, because they don’t do a lot of that anymore and the ranch is smaller than it once was.”

While she was managing the marketing and catalog design for the Haythorn, she was also making trips to the Arthur, Neb., post office to mail copies of her book. The award-winning book opened the door for her to expand her creative work, shooting for the likes of Western Horseman and American Cowboy.

It’s that “bootstrap culture” Norman leaned on when she lost her husband in a horse accident on the Boner Ranch in July of 2011. She remained on the Four Three for several years with her two young daughters before returning to Buffalo in 2013, where she had grown up. It was a chance for a fresh start, but her art and her faith remained constant in her life.

“I told my girls, ‘you’ve got to believe,’” she said. “I’ve been praying about this like I’ve never prayed in my life. I feel moved to do this and this is what faith feels like. You don’t really know the next step but we’re going to be okay.”

Now, Norman is a full-time Western artist, creating fine art, illustrations, cartoons, portrait photography, graphic design and murals. She also owns and operates an online art school, artwithlisa.com, and offers classes both in person and online to students around the world. Just as in agriculture, she said to be a working artist in Wyoming, she takes on a multitude of projects. From her Buffalo studio, Images West, she puts her unique stamp on all of the work she commissions, and her most recent mural installment is no exception.

Way Out West is the title of the mural recently installed in Lusk on the east side of Main Street. Norman said it is fashioned to look like a postage stamp and designed for travelers to use as a backdrop for selfies when they visit or travel through. It is, she said, the marriage of new technology and old standards in the least populated county in the country’s least populated state.

The mural includes a cowboy riding through a pasture near a windmill with the breaks behind him. He could, she said, be any of the cowboys or ranchers who live beneath Western skies. She included Jailhouse Rock, although it’s in town, it’s a nod to the area’s landscape and landmarks. The mural is erected similarly to a billboard to avoid the challenges of the exterior wall of the building being in poor condition, though the postmark, which reads Way Out West ties the wall and the mural together. The postmark also includes 1886, the year of Lusk’s incorporation. The 12- by 24-foot mural was painted in her Buffalo studio and transported to Lusk and installed in a frame and coated to protect it from UV rays. The finished installation spans 45 feet total.

The mural evokes lyrics Chris LeDoux once sang: “You can’t see him from the road.” The mural portrays a lone cowboy riding to check water and cattle.

“Still the unsung hero of the West, doing what needs to be done without fame or glory, but a worthy steward of both livestock and the land,” she said. “In this fast-paced, everybody’s in touch with everybody world, that’s still happening in Lusk, Wyo.”